THE CEREMONY was intended to honor their loved ones but the relatives hardly looked appeased.

Exactly a year after their deaths, no less than President Aquino conferred the highest military awards—the Medal of Valor and the Medal of Distinguished Conduct—to the 44 Special Action Force (SAF) commandos killed in “Oplan Exodus,” the operation to take down international terrorist Zulkifli bin Hir, alias Marwan in Mamasapano, Maguindanao province.

But there was no trace of joy, relief or gratitude in the family members who Monday received the posthumous awards at the Philippine National Police headquarters in Camp Crame, Quezon City, on Monday morning.

One pair after another, the relatives went up the stage at the Camp Crame Multipurpose Center, wearing formal Filipiniana attire and stony or somber expressions.

They hardly made eye contact with the President—much less smiled—as he handed them the medals and framed certificates.

Six of the families were conspicuously absent in the ceremonies—three of the SAF 44 were not represented at all. Another three were represented only by their classmates from the SAF.

The commemoration of the tragedy comes amid complaints from some of the SAF 44’s beneficiaries that they have not been receiving the benefits promised them by the government.

It also comes amid reports that some of the families had been pressured into attending the awarding ceremonies.

The ceremonies were attended at least by the immediate kin of the two Medal of Valor awardees. Receiving the medal for Chief

Insp. Gednat Tabdi, from Benguet province, was his wife and his brother. Tabdi’s brother carried to the stage Tabdi’s infant son, who was not born yet when Oplan Exodus happened.

Mr. Aquino, in his speech during the ceremonies, hailed Tabdi, the team leader of the SAF 84th Special Action Company, which acted as the “main assault” during Oplan Exodus, for “leading the team in facing the enemy forces, even if they were outnumbered.”

“[Tabdi’s] courage served as the strength and inspiration of his comrades to survive certain death,” the President said.

Receiving the Medal of Valor for PO2 Romeo Cempron, from the 55th Special Action Company in Zamboanga province, was his wife and his mother.

The President, in his speech, heaped praise on Cempron: “Despite being surrounded by more or less 700 enemies, PO2 Cempron fought fiercely. Until the end, he did not surrender. When he ran out of bullets and no longer had any firearms left, he used his own body to shield his comrades from the bullets.” 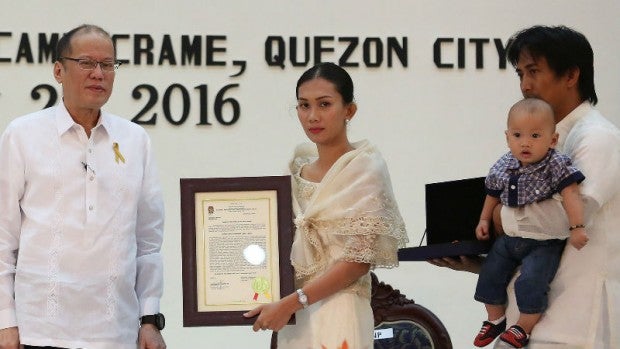 Cempron was originally slated to be posthumously awarded the Medal of Valor during the 114th PNP anniversary in August last year, but his name was removed from the original awardees’ list, allegedly on orders of Malacañang.

Of the 42 slain commandos who were posthumously conferred the Medal of Distinguished Conduct, three—Insp. Rennie Tayrus, SPO1 Lover Inocencio and PO2 Nicky Nacino—were not represented at all.

Five other SAF commandos, who were wounded in Oplan Exodus, were also conferred the Medal of Distinguished Conduct, but their names were no longer announced “due to security matters,” said the PNP spokesperson, Chief Supt. Wilben Mayor.

Earlier, however, the National Police Commission had revealed that one of the five commanders was Supt. Raymund Train, the team leader of Oplan Exodus. Train was not present during the awarding ceremonies.

Twenty-five other SAF survivors in the fire fight earlier received special promotions, according to a Malacañang statement.

In an eight-minute speech, the President did not only praise the heroism of the late SAF team members but also spoke about the government’s “continuing quest for justice” for the departed PNP personnel.

Noting “justice delayed is justice denied,” Mr. Aquino lamented that like the families of the fallen commandos, “I myself get impatient with the slow pace of the justice system in the country.”

His administration, he said, was “doing its best to seek justice (for the fallen SAF members).”

At the same time, he urged Congress to study closely the Philippine National Police law, particularly any provisions that blocked the immediate imposition of penalties for erring governments officials who were remiss in performing their duties.

“We should prevent a repeat of tragedies resulting from incidents where certain officials did not follow the orders of their superiors,” he said.

The President did not name names, but Palace sources, who asked not to be named for lack of authority to speak to media, said he was apparently referring to suspended SAF Director Getulio Napeñas, who was relieved of his post shortly after the Mamasapano incident.

He later claimed his men could have survived if military reinforcements and rescue teams arrived at the clash site immediately.

On Monday, Mr. Aquino also vowed to continue providing assistance to the families of the SAF commandos.

The government has, so far, provided more than P151 million in financial aid to these families, according to Presidential Communications Secretary Herminio Coloma Jr. 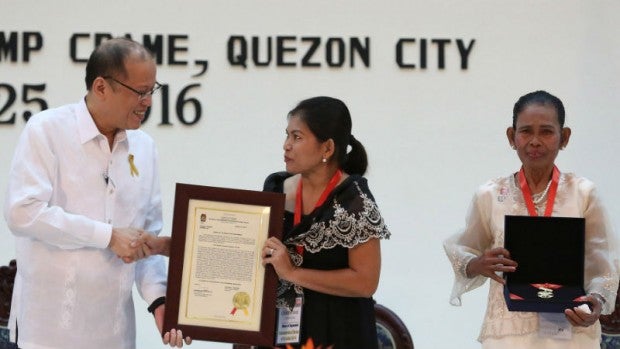 “From tuition and housing aid to healthcare, livelihood and employment assistance, the government continues to extend support not only to their immediate families but also to other beneficiaries,” presidential spokesperson Edwin Lacierda told reporters.

After the PNP event, the President had a private meeting with the families, their third in the past 12 months.

Last year, the President declared Jan. 30 a National Day of Mourning to honor the SAF commandos.

The Mamasapano massacre also dealt the biggest blow to Mr. Aquino’s popularity with his numbers dropping to an all-time low after the debacle.

Tomorrow, the Senate panel, chaired by Sen. Grace Poe, a presidential aspirant, is scheduled to reopen its investigation of the Mamasapano incident to tackle “possibly new evidence” on the clash.

The Mamasapano tragedy has “brought out many Filipinos’ long-stemmed antipathy and discrimination toward the Muslim-Filipino community,” said Presidential Adviser on the Peace Process Teresita Quintos-Deles.

Deles on Monday said “we must unlearn this dualism so we can move beyond our superficial analyses to a more discerning view of the peace process and our stakes in it.”

In a statement, she noted that “the unfortunate incident in Mamasapano, which plunged the nation in deep grief, showed the fragility of the path to peace.”

“The forcible deconstruction triggered by the tragedy compels us to a reconstruction, a recovery, a rethinking that must go deep and far and wide if we are to do justice to the truth and the pursuit for peace,” she said.

Deles also said, “the bloodbath at Mamasapano does not debunk the imperative of peace. On the contrary, it tells us and may I paraphrase the poet E.E. Cummings, that of peace, we must be more careful than of anything else.”

“It is a beacon, but it is also a fragile flower. It lives in the hearts of men and women but, stunted, it can also turn toxic,” she added. With a report from Jerry E. Esplanada