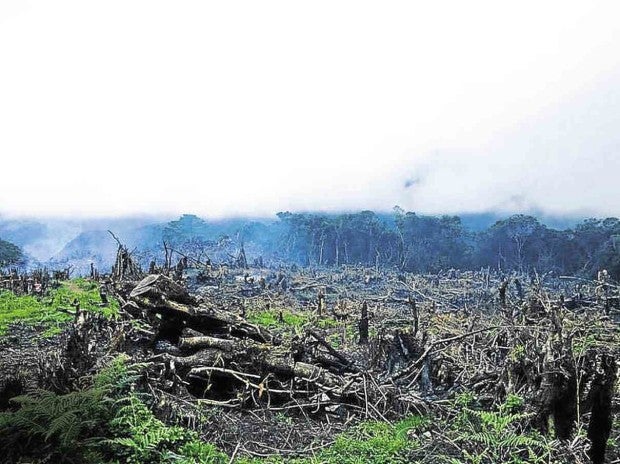 TREKKERS discovered trees burned in preparation for planting last week when they ventured into the Mount Pulag National Park. Sections have been invaded by farmers whose root crops were infested recently in their hometowns. CONTRIBUTED PHOTO

BAGUIO CITY—Mountain climbers have alerted government foresters about another wave of gardeners who have invaded the Mount Pulag National Park by taking a route through Nueva Vizcaya province.

Photographs sent by the trekkers last week showed trees burned to clear sections of a forest for planting in areas locally called Ganaba and Apunan.

These areas are accessible via the road linking the Babadak community in Bokod town in Benguet province and Balete village in Kayapa town in Nueva Vizcaya.

Park officials confirmed the latest intrusions at the boundary of Buguias and Kabayan towns in Benguet, and said the gardeners were relocating after losing crops to an infestation.

According to the book “Biodiversity and Natural Resources Conservation in Protected Areas of Korea and the Philippines,” Mount Pulag is “a largely mountainous landscape of pine forests, mossy forests, grasslands, … and cultivated and residential areas,” and home to endangered animals and vegetation.

The rare cloud rat was rediscovered thriving near the mountain’s mossy forest region.

Emerita Albas, park supervisor, said officials had investigated the incursions and had talked to the settlers, mostly from adjacent communities, who lost root crops to Fusarium wilt, a fungal disease.

According to the Bureau of Plant and Industry, Fusarium wilt attacks the water-carrying vessels of a plant, causing it to wilt and die.

Albas said camote was a staple not just for people but for pigs and chickens in these parts of the region. “They had no choice but to look for other sources of livelihood so they could eat,” she said.

In August 2014, the Center for Development Programs in the Cordillera  and the Montañosa Research and Development Center  reported that Namal village in Asipulo, Ifugao province, suffered a camote shortage when its fields were hit by Fusarium wilt.

Also hit by the infestation were camote farms in the villages of Wangwang and Tullodan in Tinoc town, also in Ifugao.

“Farmers butchered their chickens and pigs because they no longer had camote to feed them,” Albas said. They settled in the forest areas of Mount Pulag to plant vegetables, a high-value crop in Benguet, she said.

But the settlers’ losses do not justify the destruction of Pulag’s trees, Albas said, adding that the government “needs to balance things” in addressing the shortage. With a report from Vincent Cabreza, Inquirer Northern Luzon