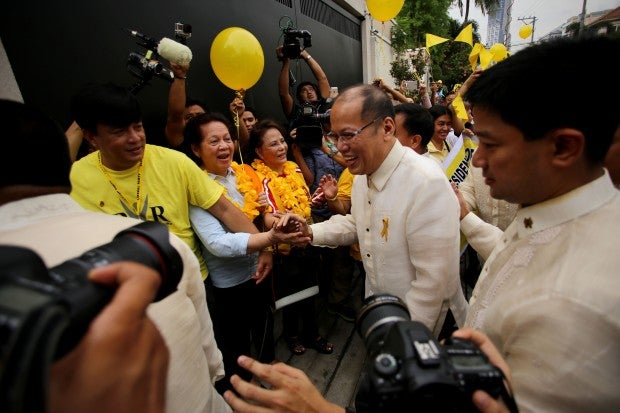 And then he is Citizen Noy.

Former President Benigno “Noynoy” Aquino III on Thursday returned to his family home on Times Street in Quezon City, where he headed after the brief turnover ceremonies to his successor, President Duterte, in Malacañang.

His supporters, all in yellow shirts carrying yellow flaglets and ribbons, sang “Tie A Yellow Ribbon Round the Old Oak Tree” as Aquino’s convoy parked on Times Street. He got off his vehicle and went onstage.

They also held homemade posters that praised and thanked him for a job well done.

As he left Malacañang, people lined up along JP Laurel Street in Manila, cheering him on as they bid goodbye to their neighbor of six years.

On Times Street, Mr. Aquino, still in his barong, gave a brief speech, thanking his neighbors for putting up with the inconveniences brought by his six years in office.

This included paint being thrown at their gates and walls by protesters, who Mr. Aquino described as people who were never satisfied with anything.

“They came here to protest  but they knew I didn’t live here,” Mr. Aquino said.

He told his supporters that hopefully their lives would “go back to normal” now that he has gone back to a normal life.

The former President later told reporters that he had a restful sleep on the eve of his last day in office.

“A huge burden has been lifted off my shoulders,” he said.

He declined to say what he and his successor, President Duterte, talked about before he left Malacañang.

“Perhaps I should leave it up to him,” he said, when asked what they talked about.

Citizen Aquino added that he and his sisters would be unpacking a lot of things at the remodeled Times Street home, then he would feed them “so that they will be energized.”

Today, he will attend a close cousin’s birthday celebration.

He recalled so many fond memories of Times Street, but the incident that left an indelible mark on his mind was the time when the neighborhood put up yellow ribbons to welcome his father, Ninoy Aquino, when the latter was allowed a furlough by the dictator Ferdinand Marcos for the latter’s 25th wedding anniversary with his wife, Cory.

It showed the defiance of the people of Times Street against Marcos, the ex-President said.

He said moving to Times Street was the “best decision” the Aquino family ever made.

The Aquinos have been living on Times since 1961.

The old house where Ninoy and Cory lived had been remodeled in time for their only son’s return from Malacañang.

Aquino said he visited the refurbished house for the first time on Wednesday, and learned about the welcome party that his neighbors was preparing for him.

He said he actually wanted to “discourage” such fanfare. But his neighbors were insistent and they were excited to have him home.

Then he led everyone in cheering, “Welcome back P-Noy!”

Aquino said he would host a party for his neighbors as soon as he and his sisters have fixed the house.

The West Triangle parish priest led the prayers for the former President, thanking the heavens for “giving us President Noy.”

The priest also asked for his good health, peace of mind so that he would be “free of stress and anxiety,” and that may the former President continue to inspire the country and lead it on the straight path.

And of course, the priest beseeched the Lord with the one thing that everyone was hoping for now citizen Noy, still a bachelor.

“We also ask that he may find time for his love life,” the priest said, and everyone screamed “Yes!” and “Amen!”