Rody ‘apo’ came in as cop 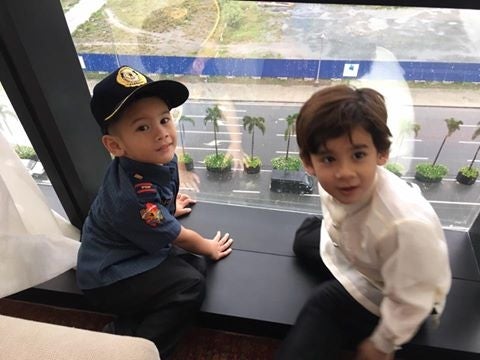 The little Dutertes—Sting and Uno—play by the window of a hotel. Davao City Mayor Sara Duterte-Carpio says her son Sting “will go down in history as a policeman.’’ NEWSDESKASIA TWITTER ACCOUNT

President Rodrigo Duterte’s inauguration followed formal tradition, while hewing as close as possible to his desire to keep the ceremonies simple and austere.

Except for members of the diplomatic corps, who were garbed in Western suits, most of the guests—including the new First Family—came in formal Filipiniana. Men wore stylish barong and women were in long flowing gowns.

A Duterte grandson apparently had his way, attending the inauguration in his favored police costume. His grandfather, the President, however, didn’t have his way. He had to conform to formality, wearing a stylized barong for the occasion.

The mood was definitely celebratory, with family members, supporters and friends of Mr. Duterte engaging in lively and spirited discussions.

Actually, there seemed to be a Visayan invasion of Malacañang on Thursday as Cebuano was the dominant spoken language at Rizal Hall. Guests from Davao had flown in expressly for the occasion. Moreover, many in the Cabinet, along with their spouses, hail from Visayan-speaking areas of the country.

As TV cameras panned the audience, some guests turned playful by mugging for the camera to the delight of many others who patiently waited for the program to begin. The program was relatively short and straight to the point—in character with the President who said he wanted to buckle down to work right away.

But as tradition dictated that the President be sworn in at precisely 12 noon, there was a break of several minutes in the program. The overflow crowd at Rizal Hall didn’t mind those minutes of dead air, as they patiently and, perhaps, excitedly awaited the oath-taking and inaugural address.

As the newly installed President was just about to end his well-delivered and well-applauded speech, there was an audible—almost concerted—gasp from the audience as he announced that he had a few more things to say, outside the prepared speech.

This did not surprise many, as it would not have been Digong without the spontaneous remarks. Thankfully, the straight-from-the-heart additions were not spiced with colorful language replete with evocative words and phrases!

Perhaps, this marked the beginning of his promise of his personal metamorphosis. After all he had said that “true change is the mandate of my government.” The appreciative audience responded with even more spirited applause.

Where the fashion was fine and formal, the food was true to simple and tasty Filipino fare which were nonetheless presented creatively—in keeping with the refined taste that Malacañang evoked.

There was no sit-down lunch, but this was no surprise to the guests, who had been forewarned about the simplicity of the food and who actually seemed more eager to chat, mingle, take selfies with the celebrities of the incoming administration.

President Duterte has described himself as a nationalist who truly loves his country. Calling himself a true probinsyano, a promdi, he has declared that “what you see is what you get.”

His friends and supporters, who were in the Malacañang audience, already know and accept that. Like the President, they see the turnover and inauguration ceremony—with its formality, indulgence, pomp and circumstance—as a necessary event before buckling down to work for matapang na solusyon and mabilis na aksyon.

(Editor’s Note: Elena Pernia, a former Inquirer Readers’ Advocate, is the dean of the College of Mass Communication, University of the Philippines Diliman, and the wife of Ernesto Pernia, the new socioeconomic planning secretary and director general of the National Economic and Development Authority.)