Robredo tells supporters:  Thanks, stand by me in next 6 years | Inquirer News
Close
menu
search

Robredo tells supporters:  Thanks, stand by me in next 6 years 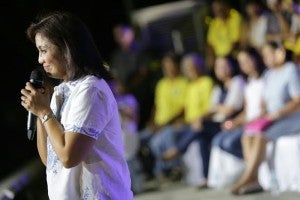 Vice President Leni Robredo thanks supporters for a successful election campaign and asks them to stay with her in her quest to ease poverty in the country. (Photo courtesy of the Leni Robredo Media Bureau)

MANILA– Vice President Leni Robredo reiterated on Thursday night that her Quezon City office would be open to everyone, especially those who supported her in her bid for the second highest post in the land.  In thanking her supporters, she also urged them to stand by her in the next six years of her quest to bring the marginalized to the mainstream of society.

Over 3,000 people gathered at the Quezon Memorial Circle for Robredo’s thanksgiving party, which was organized for her supporters who could not be accommodated at the QC Executive House for her formal inauguration earlier Thursday.

Robredo told her supporters she owed her “one percent to vice president” to her supporters, asking them to continue to stay by her side for the next six years.

In her 15-minute speech in Filipino, Robredo said she would like to know personally each one who worked hard and sacrificed in her bid for the vice presidency.

“My office in Quezon City is open for all of you. Come visit me there so that I can get to know you,” Robredo said.

The Vice President also told her supporters to move on from the deeply divisive election campaign, as she thanked all those who passionately defended her from vicious attacks.  SFM