US ship sails to Albay for humanitarian work 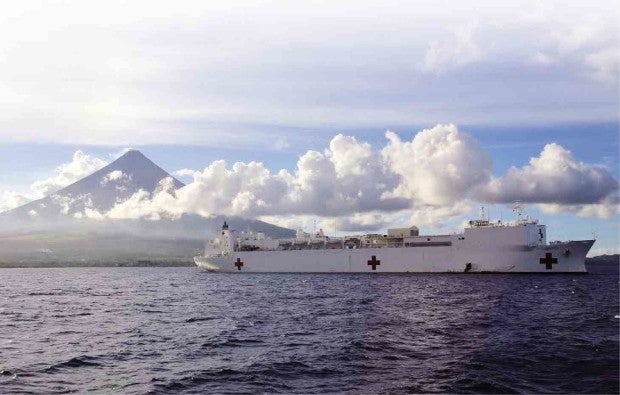 The sight of a huge, white ship marked with red crosses in the Albay Gulf and with Mayon Volcano as backdrop greeted residents of Albay province on Monday.

The USNS Mercy, a floating hospital that has come to the aid of countries, especially in times of disaster, has reached Legazpi City, the provincial capital, for a two-week humanitarian and disaster relief preparedness mission.

With at least 1,000 US Navy personnel on board, it docked in the gulf 5 kilometers from the city port.

The mission, dubbed the Pacific Partnership 2016 and hosted this year by the provincial government, aims to bring the United States’ partner nations, like the Philippines, “shoulder to shoulder” so they can prepare to face natural disasters and respond when crisis happens, said Lt. Cmdr. Kris Hooper, its public affairs officer.

The 272.49-meter (894-foot) Mercy, whose home port is in San Diego, California, provides mobile surgical and medical services in disaster-stricken areas and is involved in humanitarian relief efforts. It has a team of medical professionals, including nine doctors, nurses, medical technicians and support staff, which offers surgery, internal medicine, radiology, dental and eye health services.

Since Tuesday, the Pacific Partnership has been holding medical and dental services in Albay. Its crew will also help in the construction and repair of school buildings in poor villages in Camalig and Daraga towns, and in the cities of Legazpi, Tabaco and Ligao.

The mission, which will culminate on July 11, is expected to treat at least 4,000 patients on board and in designated areas in the province, said Cmdr. Miguel Gutierrez, director of medical operations and planning for Pacific Partnership 2016.

At least 250 people have been lined up to undergo surgical services on the ship. These include general surgery, hernia, bone realignment, cataract removal and cleft palate operations, and neurological and pediatric examinations.

The ship can accommodate 10 to 15 dental patients a day.

Gutierrez said five doctors from the Department of Health, the provincial health office and the city health office would assist the US Navy doctors.

Symposiums on nursing care, blood banking and transfusion procedures, medicine administration and practices would be held during the two-week mission. The US Navy crew will hand over the remaining medical supplies to the local government health units. 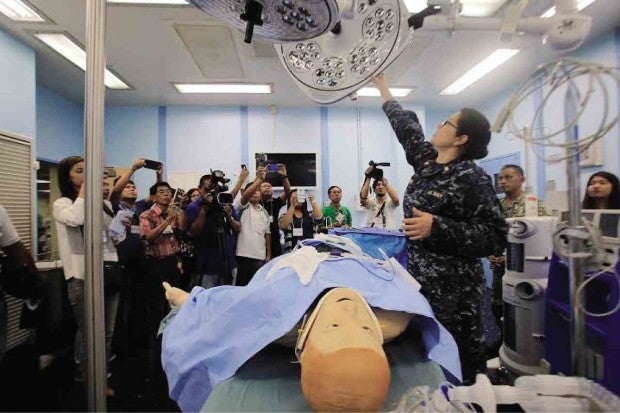 A CREW member of the USNS Mercy shows reporters one of the features of the hospital ship. MARK ALVIC ESPLANA

Lt. Col. Baylon Aler of the Philippine Army Engineering Brigade said the mission’s team of engineers had started construction of two-classroom school buildings, equipped with toilets, and repair of other classrooms in the villages of Cotmon in Camalig and Kinawitan in Daraga.

The engineers and their crew also began building a water tank and lavatory at Mabini Elementary School in Barangay Mabini in Daraga.

Hooper said the joint Philippine-US Navy Service humanitarian mission would be a sharing-and-learning exercise between the two countries in handling disaster and building communities.

It aims to strengthen the relationship between the US and the Philippines by having their respective troops work together, Rear Admiral Bruce Gillingham of the US Armed Forces said. “We are committed then, as we are now, to enhance our multilateral relationship to improve security and stability through partnership,” he said.

The Pacific Partnership took off in response to the 2004 tsunami that devastated parts of Southeast Asia. Along with other nations, the United States deployed its Navy assets, including the Mercy, which later returned to the region in 2006.

Albay has hosted at least six humanitarian exercises, including the US Air Force’s Pacific engagements, two Philippine-US Balikatan military exercises, and a five-day humanitarian mission in 2008, which involved two US Navy warships—the USS Comstock and the USS Peleliu.