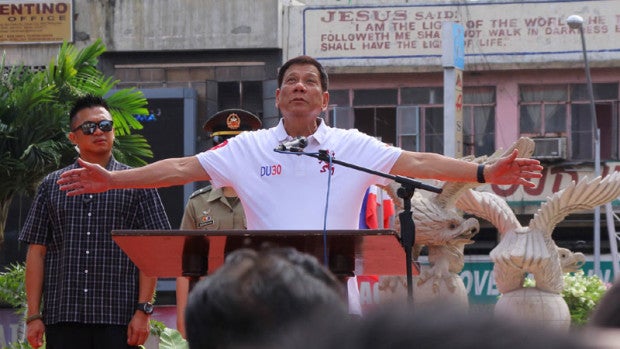 A LA UP OBLATION Incoming President Rodrigo Duterte strikes a pose like the UP Oblation at the flag-raising ceremony at Davao City Hall. Duterte, a known night person who had not attended the regular Monday event for a long time, spoke of his impending war on illegal drugs, crime and corruption. ACE MORANDANTE/CONTRIBUTOR

“He is raring to start with work right after the inauguration,” Andanar said.

Andanar said Davao-based fashion house Chardin has created for Duterte a barong Tagalog made from piña jusi fabric to be paired with black pure cotton pants.

“His wardrobe is the least of the President’s concern, but he went to fit his barong,” he said.

On Tuesday, Duterte went to Chardin to try on his barong designed by Boni Adaza.

“He wanted to incorporate a symbol to represent the 11 minorities in Mindanao. The tribal prints of the Manobo is the least complicated that’s why we have chosen that. It also shows the President’s simplicity,” Adaza said.

Guests at Duterte’s inauguration will be served simple snacks.  Malacañang Palace caterer Via Mare will be in charge of the menu.

Andanar said the said the activities on Thursday would start at 10:30 a.m. and end around 4 p.m. RAM