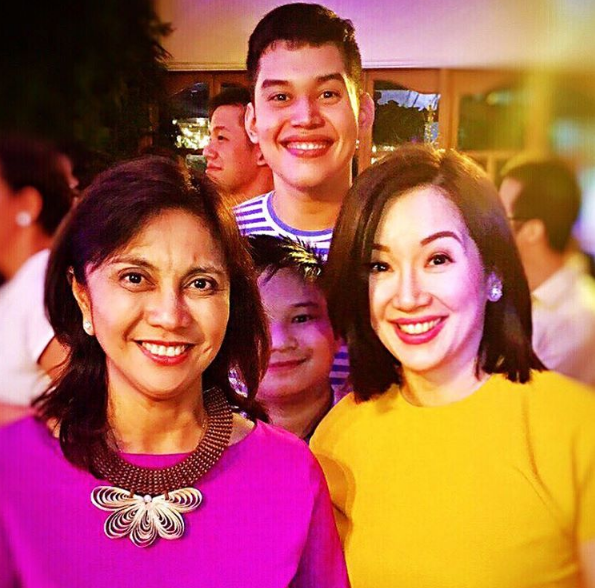 Kris Aquino and her sons Joshua and Bimby pose for a photo with Vice President-elect Leni Robredo. SCREENGRAB FROM AQUINO’S INSTAGRAM ACCOUNT

The camp of Robredo on Monday said the Aquino sisters had been invited but they had to skip Robredo’s inauguration to prioritize the turnover rites President Benigno Aquino III will attend on the same day.

“[The] Aquino sisters were invited and Kris Aquino [will] represent the family,” read the statement from Robredo’s spokesperson Georgina Hernandez sent to the media on Tuesday.

Kris also confirmed to Inquirer her attendance and that she will wear a simple Filipiniana.

READ: No VIPs at Leni’s oath-taking

Kris and the rest of the Aquino sisters, Ballsy Aquino-Cruz, Pinky Aquino-Abelleda and Viel Aquino-Dee, supported and campaigned for Robredo in the 2016 elections.

Robredo’s “short and simple” inauguration will be held at the Quezon City Reception House, the new office of the Vice President, in New Manila from 9 a.m. to 10 a.m. She will then attend a thanksgiving party with her supporters at 5:00 p.m.

Robredo’s camp also said that it has invited her running mate, defeated presidential candidate Mar Roxas and his family to attend the ceremony.

Roxas has not confirmed his attendance. IDL/rga