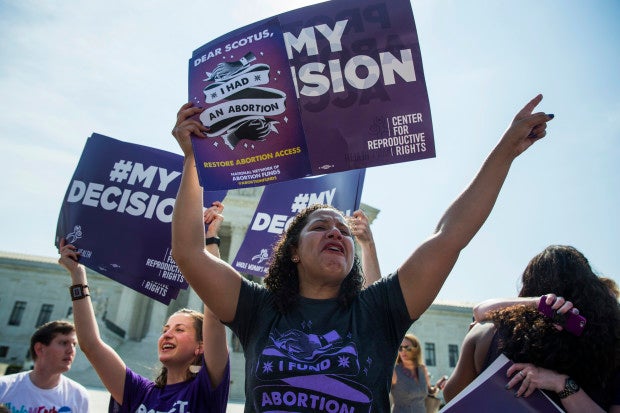 Renee Bracey Sherman of Chicago, Illinois, celebrates at the Supreme Court in Washington, Monday, June 27, 2016, after the court struck down Texas’ widely replicated regulation of abortion clinics. The justices voted 5-3 in favor of Texas clinics that had argued the regulations were a thinly veiled attempt to make it harder for women to get an abortion in the nation’s second-most populous state. AP

WASHINGTON, United States — The US Supreme Court on Monday struck down a Texas law restricting access to abortion, handing a major victory to the “pro-choice” camp in the country’s most important ruling on the divisive issue in a generation.

Crowds of passionate activists from both sides of the debate shed tears of joy and dismay outside the court over the closely-watched decision, which has far-reaching implications for millions of women across the United States.

The black-robed justices ruled by 5-3 to strike down the Texas measures which activists say have forced more than half of abortion clinics to close in the second most-populous US state, with the conservative-leaning Anthony Kennedy siding with his four liberal colleagues on the bench.

President Barack Obama joined civil rights activists and women’s health providers in hailing a milestone for abortion rights, with the issue now set to be thrust center stage in the White House race.

“Every woman has a constitutional right to make her own reproductive choices. I’m pleased to see the Supreme Court reaffirm that fact today,” Obama tweeted.

Outside the court, pro-choice activists breathed a collective sigh of relief.

“I’m all about life and love and babies,” said Nita Amar, a 63-year-old labor and delivery nurse.  “But if women lose access to abortion rights, they’re going to go back to the alleys and use coat hangers again.”

Others were distraught however.

“I’m devastated. I just cried,” said 25-year-old “pro-life” activist Sarah Manning, who came with husband Jonathan and their seven-month-old baby Joshua. “How many more people will die because of this ruling?”

Under the Texas legislation, doctors who perform abortions were required to have admitting privileges at nearby hospitals and their clinics needed to meet the standards of an ambulatory surgical center.

Justice Stephen Breyer, writing for the majority, said “we conclude that neither of these provisions offers medical benefits sufficient to justify the burdens upon access that each imposes.”

The court ruled that both provisions placed “a substantial obstacle in the path of women seeking a previability abortion” that “each constitutes an undue burden on abortion access” and “each violates the Federal Constitution.”

“When a State severely limits access to safe and legal procedures, women in desperate circumstances may resort to unlicensed rogue practitioners, faute de mieux, at great risk to their health and safety,” Justice Ruth Bader Ginsburg wrote in a concurring opinion, employing a French phrase meaning “for lack of a better alternative.”

‘Much is at stake’

Defenders of the 2013 Texas law claimed that it aimed to protect women’s health, but opponents saw it as part of a nationwide drive to restrict abortion access.

The rules meant that hundreds of thousands of Texas women were or would be forced to seek abortion services far from their homes and faced a weeks-long wait while clinics struggle with strict requirements and costly upgrades.

Activists had sounded the alarm over moves to enact similar laws in other states, affecting millions of women, which would have received a major boost from a ruling in Texas’s favor.

Leading figures in the Republican Party — whose presumptive nominee for president Donald Trump has said women should be “punished” for having an abortion — expressed dismay.

But Democratic White House hopeful Hillary Clinton hailed a victory for American women, while warning the fight was far from over with abortion “under attack” across the United States.

“In the first three months of 2016, states introduced more than 400 measures restricting access to abortion,” Clinton said in a statement. “Today’s decision is a reminder of how much is at stake in this election.”

Planned Parenthood, the women’s health provider, tweeted: “This is a win for Texans &amp; women across the country who need access to abortion.”

With the death of stalwart conservative Antonin Scalia, the Supreme Court is evenly split between conservatives and liberals — and the eight justices appeared sharply divided during hearings on the key abortion case.

The conservative-leaning justice helped draft a ruling 24 years ago that struck down state restrictions imposing an “undue burden” on a women seeking an abortion.

During hearings on the Texas case, Kennedy had raised a number of concerns about the law — noting that its restrictions and associated delays were increasing the number of surgical abortions and decreasing those induced by medication.

The ruling noted that: “When directly asked at oral argument whether Texas knew of a single instance in which the new requirement would have helped even one woman obtain better treatment, Texas admitted that there was no evidence in the record of such a case.”