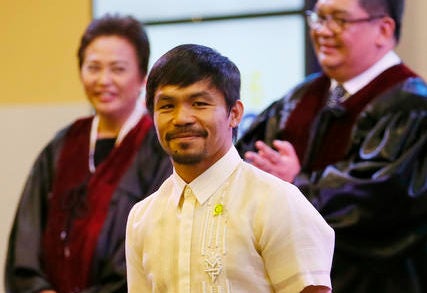 The Court of Tax Appeals (CTA) on Monday granted the request of the Bureau of Internal Revenue (BIR) for more time to respond to Filipino boxing champion and Senator Emmanuel “Manny” Pacquiao and his wife’s motion to lift notices of tax liens annotated on their properties.

A tax lien is one of the remedies used by the BIR to collect taxes. It is automatically created, by operation of law, in favor of the State once the tax becomes due and demandable. The tax lien attaches to the property as long as the deficiency taxes and corresponding penalties and surcharges remain unpaid.

In this case, the BIR is collecting P2.26-billion unpaid taxes from the couple and it has ballooned to P3.2 billion due to surcharges and penalties.

Pacquiao challenged the assessment before the Tax Court that eventually went to the Supreme Court.

Pacquiao and his wife Jinkee said the Tax Court committed grave abuse of discretion when it issued the resolution requiring them to deposit the amount of P3,298,514,894.35 or post a bond of P4,947,772,341.53 as a condition to stop the BIR from enforcing an order to collect tax liabilities worth P3.29 billion.

The Pacquiaos said the assessment and collection process employed by the BIR violated their right to due process of law.

Pacquiao believed the government should no longer run after him, citing documents from the United States Internal Revenue Service (IRS) that he paid $8.35 million in taxes from his fight purses in 2008 and 2009.

Then, the high court, last April ordered the Tax Court to determine whether the P3-billion cash bond or P4-billion surety bond that the senator has to pay will be reduced or be dispensed with.

The Tax Court has started conducting a hearing to determine whether to suspend collection of taxes by payment of a reduced bond or totally dispensed with the bond payment.

It already started presentation of evidence.

Then, Pacquiao’s camp filed a motion to lift the notices of tax liens on their properties. The Tax Court ordered the BIR to comment but the BIR sought an extension to which the court granted.

The government is open to a compromise agreement with Pacquiao, however, BIR Commissioner Kim Henares said the boxer should make the first move since he is the one seeking for a tax credit.  The Philippines and the US have a treaty against double taxation. RAM