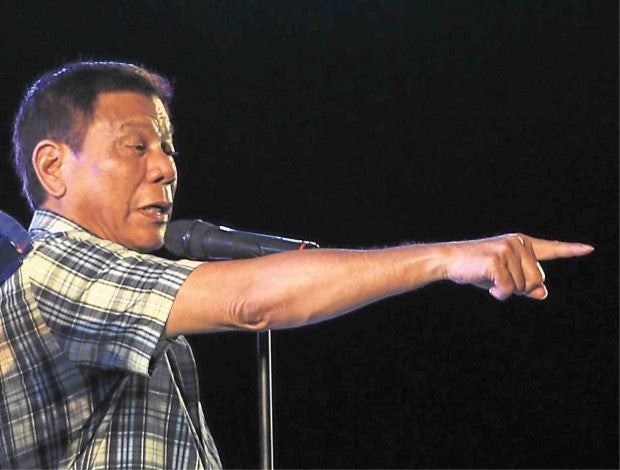 Incoming-President Rodrigo Duterte makes a point during a speech before supporters. INQUIRER FILE

Incoming-President Rodrigo Duterte on Monday hit out at “stupid” human rights campaigners, as he defended his imminent war on crime and emphasized the death penalty was for retribution.

Duterte gave a lengthy speech in his southern hometown of Davao to outline his vision for the nation once he takes office on Thursday, with a heavy focus on his controversial plans to fight crime.

“These human rights (groups), congressmen, how stupid you are,” Duterte said, as he highlighted their criticism of his plans to impose late-night curfews on children being out on the streets and to reintroduce the death penalty.

“I believe in retribution. Why? You should pay. When you kill someone, rape, you should die,” he said.

Duterte, 71, won last month’s presidential elections in a landslide after campaigning largely on a platform of ending rampant crime, warning that the Philippines was in danger of becoming a narco-state.

He promised that tens of thousands of people would die, with security forces being given shoot to kill orders.

Since winning, Duterte has also promised to give bounties to police for killing drug dealers, and also encouraged ordinary citizens to kill or arrest suspects.

Duterte has been accused of links to vigilante death squads during his nearly two decades as mayor of Davao, which rights groups say have killed more than 1,000 people.

Local and foreign human rights groups have expressed deep concern about his plans as president, fearing an explosion of extrajudicial killings similar to those seen in Davao.

The United Nations’ human rights chief, Zeid Ra’ad Al Hussein, this month urged Duterte not to reintroduce the death penalty, while criticizing other elements of the planned war on crime.

“The offer of bounties and other rewards for murder by vigilantes, and his encouragement of extrajudicial killings by security forces, are massive and damaging steps backwards which could lead to widespread violence and chaos,” Zeid said.

“When they describe or characterize a human rights violator, these fools make it appear that the people you kill are saints, as if they are pitiful or innocent,” he said.

Duterte said European ambassadors were also among those who had expressed concern over the death penalty and extrajudicial killings.

The Philippines abolished the death penalty in 2006 following fierce opposition from the Catholic Church, the religion of 80 percent of Filipinos.

Duterte previously said he preferred death by hanging to a firing squad because he did not want to waste bullets, and because he believed snapping the spine with a noose was more humane.