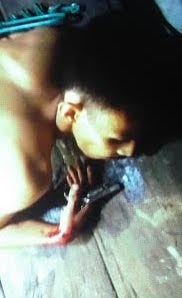 Stevedore John Erwin David, 23, died after he allegedly tried to shoot it out with the Navotas City Police, which were conducting anti-drugs operations on June 23, 2016. (Photo by Jodie Agoncillo, INQUIRER

MANILA — A ranking police colonel has described a slum area inside the government-run Navotas Fish Port as a haven of criminals, where felons could easily hide and which law enforcers had a hard time penetrating.

Last Thursday, more than 100 cops swooped down on the area and arrested 13 people who were believed to have been involved in illegal drugs.

“The criminals know they’re safe there because authorities could hardly penetrate it,” he said.

During the simultaneous operation, John Erwin David died in a shootout with cops who were serving a warrant for his arrest for drug peddling.

Novicio described the place inside Barangay North Bay Boulevard North as cave-like hell. “It was dark and hard to penetrate. We even held the operation on noon time because it’s dangerous at night,” he told the Philippine Daily Inquirer.

Of those arrested, three were held for peddling illegal drugs, five were nabbed for possession of shabu (methamphetamine hydrochloride), while the five others were caught in the act of sniffing shabu.

All suspects were living in shanties and hovels in Market 3 inside the fisheries complex, Novicio said.

Cops swooped down on them past Thursday noon in an operation dubbed as one time, big time ,where cops aim to arrest as many law offenders as possible, including those with standing warrants of arrest.

Sodario will also be charged for maintaining a drug den because they were caught inside her house.