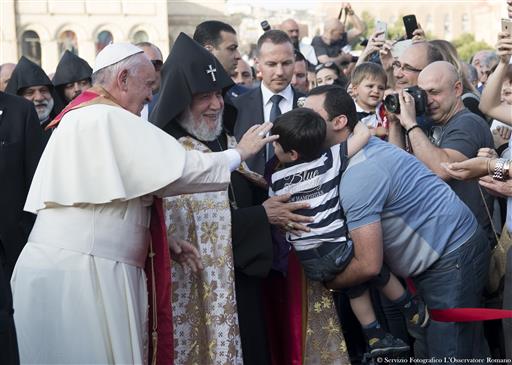 Pope Francis and Catholicos Karekin II, right, reach out to touch a child during an Ecumenical encounter and prayer for Peace in Yerevan’s Republic Square, Armenia, Saturday, June 25, 2016. AP

YEREVAN, Armenia  — The Vatican is strongly denying Turkish claims that Pope Francis has adopted a “mentality of the Crusades” by recognizing the Ottoman-era slaughter of Armenians as “genocide.”

The Vatican spokesman, the Rev. Federico Lombardi, said nothing in Francis’ texts or words during his Armenian trip showed any hostility to Turkey and in fact were infused with calls for Armenia and Turkey to build bridges of peace and reconciliation.

“The Pope is not doing Crusades,” he said Sunday. “He has said no words against the Turkish people.”