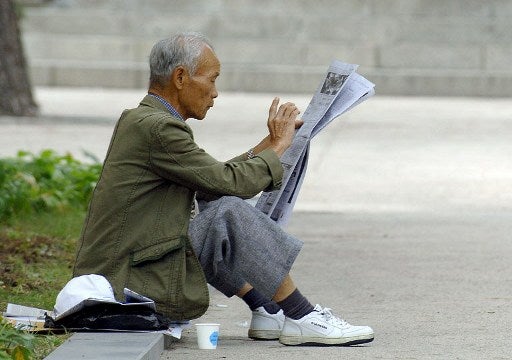 An elderly man reads a newspaper at a park in Seoul. South Korea. The country is battling the effects of an ageing population and the lack of young people. AFP PHOTO FILE

GUNWI, South Korea — It’s lunch break at Seoksan Elementary School and the entire student body has taken to the vast playground for a game of football — with just three players on each side.

“We don’t really have enough people and there’s no goalkeeper, but it’s still fun,” said Lee Jung-Bin, playing on the same side as his sole fourth grade classmate, Kim Dong-Won.

Lee is one of only six students — all boys aged seven to 11 — attending the school in the southern South Korean rural county of Gunwi, which once boasted 700 pupils.

Many classrooms are padlocked and rusty goalposts and a basketball hoop stand forlornly at the corners of the playground, while an old banner welcoming queries “for admissions and transfers” flutters on a nearby fence.

Seoksan is one of many “mini-schools” struggling to stay open in rural communities that have been decimated by a dramatic demographic shift in South Korea which now has one of the world’s lowest birth rates.

By 2030, a quarter of all South Koreans will be over 65 years old, and the overall population is expected to peak at around 52 million the same year before entering a period of steady decline.

This so-called “silver tsunami” poses a major challenge for Asia’s fourth-largest economy as the young, working-age population declines and the cost of caring for the elderly escalates.

And in remote, rural communities like Gunwi, which lies some 200 kilometers southeast of Seoul, the trend is exacerbated by a youth exodus to the cities for work.

Nestled among mountains and known for its mushrooms and apples, Gunwi county boasted a population of more than 70,000 in the 1980s.

That number now stands at 24,000 with nearly 40 percent over 65 years old — one of the highest ratios in South Korea.

“I’m worried this county might disappear from the map once we die,” said Lee Jong-Rak, a local official of 38 years standing.

Childbirth has become so rare that there isn’t a single obstetrician or maternity ward in the entire county, and more than 20 elementary, middle and high schools have closed since the 1990s.

At the other end of the demographic spectrum, elderly care facilities have mushroomed and the number of their permanent residents has tripled in the past decade.

Outside one Gunwi community centre where they had been attending a health class, a group of elderly men and women climbed onto a rusty town bus whose driver — in his 60s — was the youngest on board.

South Korea has a fertility rate of 1.19 births per woman — the lowest among OECD member nations.

More than 3,700 schools nationwide have closed since the 1990s and thousands more are set to be shut down or merged in coming years, according to the education ministry.

And this year, more than 20 percent of 6,218 elementary schools across the country had a first grade intake of less than 10 students.

Lee Sang-Ho, a researcher at Korea Employment Information Service, said Gunwi was one of many rural communities facing a “high risk of extinction” in the next 30 years.

And he warned that a collapse in production and consumer demand triggered by a rapidly ageing society wasn’t a threat limited to the countryside.

“The same forces behind the plight of the rural communities will eventually reach urban areas, pushing the entire national economy into a long-term downturn cycle,” Lee said.

In Gunwi’s county seat, also called Gunwi, small businesses are struggling to cope with an ageing consumer base that has little or no consumerist intent.

“Look around here. How many people in their 20s do you see?” said the owner of a small electronics shop near the town hall.

“These days, I can’t even put rice on the table,” said the owner, who declined to be identified.

Gunwi officials have done what they can to rejuvenate the county, offering free school lunches and cash incentives for couples having a third child.

The central government has launched similar schemes across the country, pumping more than 80 trillion won ($68.3 billion) since 2006 into programs aimed at encouraging people to marry young and have larger families, according to health ministry data.

But critics say such schemes ignore the root causes of the problem, including a lack of quality jobs, childcare facilities and support for working mothers.

At Seoksan elementary, the school’s three remaining teachers were downbeat on their future employment prospects.

“Realistically speaking, it’s hard to see the school remaining open for another 10 years,” Kang Min-Sung said after finishing her reading class with three students in a classroom big enough for 30.

Kang, 28, grew up in Gunwi. After high school she left for for college in the nearest major city Daegu where she opted to stay after graduation.

Teaching at the school requires an hour-long daily commute by car and a strong sense of commitment.

“Schools like this, however small, are necessary for the education of the children who live here,” she said.

“I just don’t know how many will be left for us to teach in the future.”