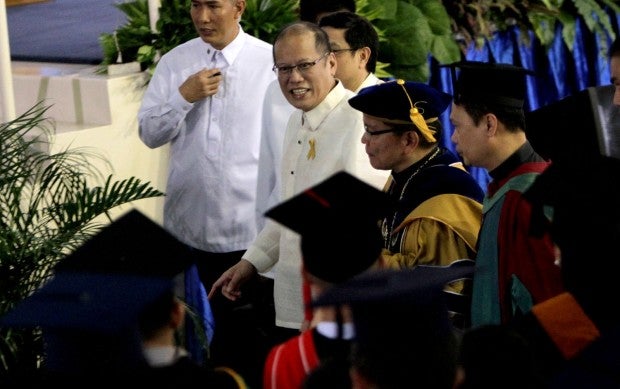 President Benigno Aquino III on Saturday urged graduating students of Ateneo University to be critically discerning as they head off to pursue their dreams, and not allow themselves to be simply influenced by public opinion.

In his final commencement speech as President, coincidentally made at his own alma mater, Mr. Aquino told the graduates, who were born after 1986, that they must have been aware that his father, Sen. Benigno “Ninoy” Aquino Jr., had yet to step on the tarmac of the airport when he was assassinated, triggering massive protests that led to the Edsa People Power Revolution 30 years ago.

“The philosopher Edmund Burke said: ‘The only thing necessary for the triumph of evil is for good men to do nothing.’ The dictatorship has ended but the need to take part in social issues remains. This is part of being ‘men and women for others,’” Mr. Aquino said, referring to their school’s Ignatian spirit.

Mr. Aquino did not mention his elected successor, Davao City Mayor Rodrigo Duterte, but the reference to Duterte’s seeming disregard for human rights and preference for extrajudicial executions of suspected criminals was clear.

More than 50 drug suspects have been killed by police since the election on May 9 of Duterte, who has told the Philippine National Police not to wait for him to assume office before enforcing his promised merciless fight against crime.

READ: Duterte to criminals: You don’t have to be afraid, you will surely die

Rights campaigners have called for investigations of the killings and the Commission on Human Rights has vowed to oppose Duterte’s mailed-fist policies.

Mr. Aquino will step down at noon on June 30, to be replaced by Duterte, who is hugely popular despite his autocratic tendencies.

In his homily during the baccalaureate Mass, Fr. Karel San Juan said May’s elections showed how divided the Filipinos were on how to bring about change, what type of leader was needed, and how power was to be exercised.

“Are we ready to be engaged yet with our people? To listen to them yet again to understand them (beyond) our bias and prejudices, to give way to understanding new connections, new relationships, all of which are rooted in our capacity to extend mercy and compassion, touching yet again the hearts and souls of people?” he said.

Some 3,000 graduates, parents, guests, and faculty filled the Ateneo covered court to listen to Mr. Aquino’s speech, which he delivered in Filipino.

The President also delivered the commencement speech for Ateneo’s Class of 2011.

Mr. Aquino was a first year high school student at Ateneo when martial law was declared, spending his afternoons visiting his father in jail.

The President, now 56, earned an economics degree from Ateneo but was unable to attend his graduation because five days before the event, he had to fly to the United States to join his parents and sisters lest the dictator Ferdinand Marcos cancel his exit visa.

As he began his speech, President Aquino apologized for “delaying the proceedings.”

He said he felt the “pressure” to give a good speech, after a Manila newspaper, which he did not name, reported that his Ateneo commencement speech would be his last as President.

Added to this, Mr. Aquino said he had relatives and friends in the audience.

He said his speech went through four revisions.

The President said the Ateneo president, Fr. Jett Villarin, who was a year ahead of him at the university, teased him about how much he loved to cram.

And when he sought for Villarin’s advise on how to write his speech, Mr. Aquino said the priest told him in a text message, with a smiley emoticon at the end: “Just speak from your heart. Tell of the things that inspired you, sustained you. And perhaps that will in turn inspire and challenge these aspiring young ones to become men and women for others, generous enough to offer their lives for our people.”

In his speech, Mr. Aquino said he strove to have a “government for others,” and mentioned the great economic strides the country has made, as well as the improved social services for easing poverty.

“Isn’t it that when you continue a system that does not maximize the chance to help others, you are leaving them in a poor state? As the liberation theory goes, ‘If you do not fight an oppressive structure, you are supporting it,’” he said.

The President said he drew inspiration from fellow Ateneans, as much as he had been told that he had been inspiring to them.

Mr. Aquino thanked the Ateneo community for being among the first to stand up to the attempts at martial law revisionism, issuing a collective statement against those “who tried to make us forget the nightmare that was martial law.”

The university issued the statement at the height of the controversy kicked up by the claim of Sen. Ferdinand “Bongbong” Marcos Jr., the son of the late dictator, that the Philippines saw its best years during his father’s martial law rule.

READ: Ateneo takes the lead in ‘One Big Fight’

He recalled with fondness the days he spent at the university, from the poker faced teachers during philosophy exams, the chapels filled with students during exam week, as well as the time when the cafeteria introduced siopao while biology students dissected cats.

No one, he said, ever bought the siopao.

“It was an important lesson in marketing,” the President said, drawing laughter from the audience. TVJ

Ateneo presidents back statement vs Marcos’ ‘distortion of history’

Tale of two welcomes: Imelda, Ateneo and the hero it once insulted