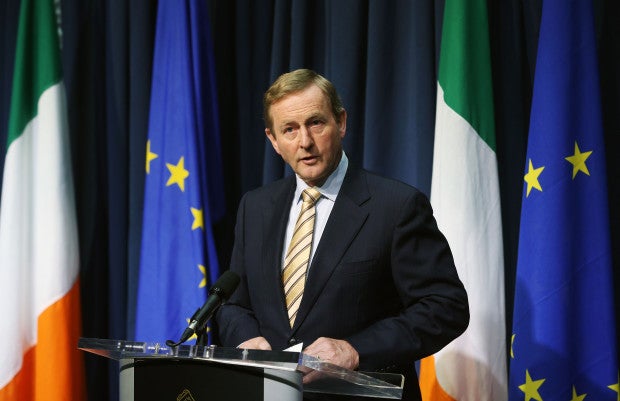 Irish Prime Miinister Enda Kenny speaks during a press conference in Dublin on June 24 after Britain voted to leave the European Union in an historic referendum. AP

EDINBURGH, Scotland—The United Kingdom’s stunning vote to depart the European Union could end in the breakup of the UK itself.

While majorities of voters in England and Wales backed the campaign to leave the 28-nation bloc, the UK’s two other regions of Scotland and Northern Ireland voted to stay. Hot on the heels of Friday’s results, nationalist leaders in both countries vowed to leave the UK if that is the required price to keep their homelands fully connected to Europe.

Scotland, where nationalists already in power narrowly lost a 2014 independence referendum, appears poised to be first out the UK door if its English neighbors don’t manage a negotiated U-turn to remain inside the EU. Most analysts dismiss that prospect.

“Scotland faces the prospect of being taken out of the EU against our will. I regard that as democratically unacceptable,” said Scotland’s leader, First Minister Nicola Sturgeon. More than 60 percent of Scots voted to remain in the EU, compared with 48 percent of voters in the UK overall, reflecting Scots’ belief that EU membership provides a moderating influence on political life in a UK traditionally dominated by the vastly more numerous English.

Sturgeon emphasized that her administration would aim first to help negotiate a compromise between the British government in London and EU chiefs in Brussels “to secure our continuing place in the EU and the single market.” But she said such hopes appeared unlikely to prevail, and made a second Scottish independence referendum “now highly likely.” She said such a vote would have to be held before the United Kingdom formally exited the EU, which could happen as soon as 2018.

Scotland in September 2014 voted 55 percent to 45 percent to reject independence. But leading members of Sturgeon’s Scottish National Party said they were confident that many voters who rejected independence two years ago were ready to switch allegiance given England’s decisive embrace of euroskepticism.

“People in Scotland are quite simply stunned,” said party lawmaker John Nicolson. He said Britain’s traditional big three parties—the Conservatives, Labour and Liberal Democrats—all argued two years ago that UK membership was the only way to keep Scotland securely within the EU.

Next door, Irish nationalists in the long-disputed UK region of Northern Ireland say the British vote has reignited their demands for an all-island referendum to reunite the two parts of Ireland after 95 years of partition. They argue that a British withdrawal from the EU would force authorities in both parts of Ireland to renew customs and security controls on what would become the UK’s only land border with an EU state, the Republic of Ireland.

Sinn Fein, already in power in Northern Ireland’s 9-year-old unity government and positioned to become the Republic of Ireland’s top opposition party, insists that the hundreds of thousands of Irish citizens who live in Northern Ireland must be given a chance to vote for their own UK escape.

Kenny and Britain’s secretary of state for Northern Ireland, Theresa Villiers, agreed that Northern Ireland’s US-brokered 1998 peace accord contained a provision for staging an all-Ireland vote on reunification in event of popular demand. But both asserted that decades of opinion polling and election results had demonstrated that such a demand was too weak to merit a vote anytime soon.

Kenny said his government would support an Irish unity referendum only if analysts could document “a serious movement of a majority of people to a situation where they would want to join the republic. There is no such evidence.”

“There are much more serious issues to deal with in the medium term,” he said, citing the need to protect Ireland’s decades-old agreement to maintain special travel and trade relations with Britain, an agreement that predates both nations’ 1973 entry to the then-European Economic Community. “That’s where our focus is.”

And Villiers, who joined Conservative Party rebels in opposing Prime Minister David Cameron’s push to remain in the EU, called a potential Irish referendum “a divisive distraction.” She noted that “remain” won with just 56 percent of the vote in Northern Ireland, the biggest per-capita recipient of EU aid in the UK

Left unmentioned was the ever-present sectarian rivalry of Northern Ireland, where a decade of delicately balanced peace has followed three decades of bloodshed that left nearly 3,700 dead. While Sinn Fein led the Catholic minority in seeking to remain in the EU, the top Protestant-backed party campaigned to reject it. As a result, Catholic areas staunchly backed “remain,” Protestant areas “leave.”

Sinn Fein usually is an EU critic, but this time it backed the “remain” campaign because of the risk that Ireland’s nearly invisible border could become a daily economic, social and security obstacle again. Sinn Fein’s overarching goal is to overturn the 1921 division of the island, when Irish rebels in the south fought a successful war of independence from the UK but pro-British Protestants anchored in industrial Belfast received a new northern state that remained within the UK

Martin McGuinness, the former Irish Republican Army commander who is Sinn Fein’s co-leader of the Northern Ireland government, said Irish nationalists in the north—representing more than 40 percent of the population—would demand a chance to test public support for Irish unity versus continued UK membership.

McGuinness said the prospect of reintroducing security checks along Northern Ireland’s meandering 310-mile (500-kilometer) border, barely a decade after the outlawed IRA renounced violence and British security forces were withdrawn from border forts, should be avoided at all costs.

“Anybody who doesn’t think this is big stuff needs to get their head around it. This is huge for us,” McGuinness said. “I do have great concerns about the future.”

In Scotland, high-profile opponents of independence forecast that Cameron’s backfiring referendum would end in the UK’s own fracture.

“Cameron’s legacy will be breaking up two unions,” she said in a tweet. “Neither needed to happen.”