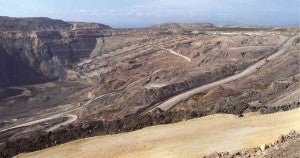 The open pit mine of Semirara coal mine in Antique. 2014 FILE PHOTO BY NESTOR P. BURGOS JR, Inquirer Visayas,

MANILA —  As the mining and oil index of the Philippine Stock Exchange dropped 488.35 points, equivalent to a 4.09 percent drop, on Tuesday, there was concern over whether companies engaged in coal mining and coal-fired power plant development could be hit as well.

Most of those hit were copper and gold mining companies. The same trend was not felt by companies engaged in coal mining and coal power plant development, at least as of Tuesday’s close.

Among the active trades for the day were Semirara Mining and Power Corp. stocks, which finished up 0.23 percent. Among the companies associated with coal mining and/or coal power plant development were largely unscathed. with known coal miner and power plant developer Semirara Mining and Power Corp. (SCC) among the most actively traded. SCC finished 0.30 points or 0.23 percent up to P129.80 per share.

Noting that the mining firms affected in the stock price crash have been mostly engaged in mineral mining and that AboitizPower’s coal power plant feedstock have been coming  from abroad, AboitizPower president and COO Antonio R. Moraza said in a text message, “That (mining stock crash) does not affect us at all.”

AboitizPower is the holding company for the Aboitiz Group’s investments in power generation, distribution, and retail electricity services. In May, AboitizPower said it was increasing spending on energy projects this year, mainly on coal-fired and hydro power plants, to meet its capacity expansion target. Moraza said the company might spend about P51.5 billion this year, up from the P30 billion spent last year.

MPIC also holds a controlling stake in the Manila Electric Co., which has a unit engaged in coal-fired power development.

Mining stocks crashed following news that the post of environment Secretary had been offered to Gina Lopez, who has been most associated with anti-mining advocacies and eco-tourism. She accepted the Cabinet position in President-elect Rodrigo Duterte’s administration.

Among the stocks most affected were those of Philex Mining Corp. and Philex Petroleum Corp., which are also Pangilinan-led companies.

In 2012, a heated exchange between Pangilinan and Lopez highlighted a debate on whether mining has a place in Philippine development.

During a televised debate, Lopez said mining was being approved in areas that could be devoted to agriculture and tourism, while Pangilinan was saying that mining could develop areas not suitable to tourism or not productive enough for agriculture.

Pangilinan cited Padcal in Surigao del Norte, a place that he said was deforested and denuded even before mining took place. There, he said, Philex Mining had planted trees and developed housing, schools, and other facilities for the community. At one point Lopez again said, “Maybe that place is nice and I submit it may be nice…But maybe when you make a statement that all the areas where there’s gonna be mining are ugly anyway, that’s the point.” Pangilinan then answered, “I did not say that. Now you’re lying.” SFM/rga