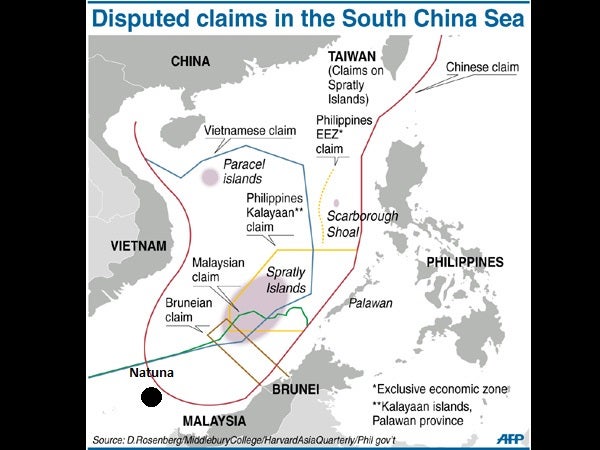 The map shows the Natuna Island (lower left) outside the previously plotted disputed territory in the South China Sea. The Indonesian Navy has clashed with Chinese fishermen in the seas off the island.

JAKARTA, Indonesia — Indonesian President Joko Widodo was Thursday set to visit remote islands close to waters where Chinese and Indonesian vessels have repeatedly clashed, as tensions mount between the nations in the South China Sea.

Widodo aims to assert Indonesia’s sovereignty over the Natuna Islands in the northwestern fringe of the archipelago during the trip and is accompanied by a high-level delegation including the foreign minister and armed forces chief, the government said.

“As head of government and head of state, the president wants to ensure that Natuna is part of Indonesia’s sovereignty.”

Last week Indonesian warships seized a Chinese-flagged fishing vessel and detained its crew for allegedly operating illegally in the Natunas’ exclusive economic zone, the third such skirmish between vessels from the two countries in the area this year.

Beijing, whose growing assertiveness in the South China Sea is stoking regional tensions, protested and claimed that one fisherman was injured after Indonesian vessels fired warning shots. Jakarta says none of the detained crew were hurt.

Following the clash, China said the two countries had overlapping claims “for maritime rights and interests” in the area, raising concern among observers who believe Beijing is toughening its stance by openly acknowledging a dispute with Jakarta.

Indonesia’s foreign minister insisted Wednesday that the country does not have any overlapping claims in its waters with China.

A senior US State Department official also warned this week that China is using its fishing fleets with armed escorts to bolster maritime claims.

Unlike some of its Southeast Asian neighbors, Indonesia has long maintained it has no maritime disputes with China in the hotly contested South China Sea and has no overlapping claims with Beijing to reefs or islets there.

But Beijing’s claims to almost the entire sea overlap Indonesia’s exclusive economic zone — waters where a state has sole rights to exploit resources — around the Natunas.

China has in the past said it recognizes Indonesia’s sovereignty over the Natunas Islands themselves, an archipelago that is home to rich fishing grounds.

Widodo’s visit on Thursday is his first to the islands as president. During the trip, his cabinet will hold a meeting on a warship and the official topic of discussion will be “the economic potential” of the islands and their future development, according to the president’s office.

Confrontations between Indonesian and Chinese vessels around the Natunas have escalated since Jakarta launched a crackdown on illegal fishing in 2014.