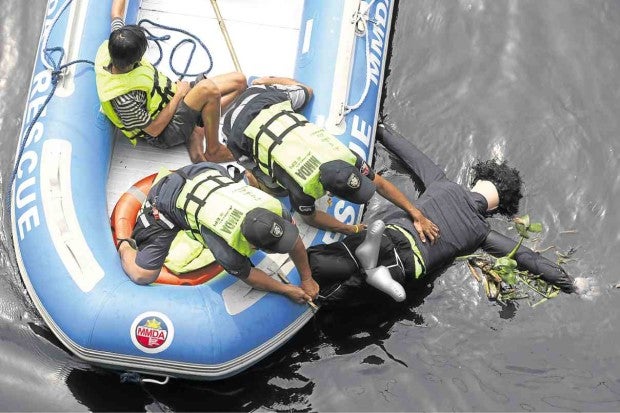 A TEAM from the Metropolitan Manila Development Authority plays out a Pasig River rescue scenario using a dummy under the Edsa-Guadalupe bridge in Makati City. Niño Jesus Orbeta

They included even those who cannot walk too far: At New Bilibid Prison (NBP) in Muntinlupa City, orange-shirted inmates calmly filed out of their cell buildings, hands placed over their heads, into an open-air basketball court, as the exercise simulating the effects of a 7.2-magnitude quake kicked off at 9 a.m.

NBP officials allowed the media to observe from a balcony as prisoners at the maximum security compound poured out into the open in sequence according to their gangs—Batang City Jail, Batang Mindanao, Batang Cuerna, Batman, etc.

“What are you doing there? There’s an earthquake and you are still walking!” a Bureau of Corrections guard barked at one inmate who was roaming around by himself—and who was either clueless or couldn’t care less about what was happening.

One prisoner—addressed by his cell mates as “Zoren Legazpi” (like the actor)—drew laughter from his peers and reporters as he came out still holding his breakfast plate.

About 200 inmates were shown to the media but Supt. Richard Schwarzkopf, the NBP chief, said all the 15,000 inmates in the maximum security compound alone participated in the Shake Drill, where they performed the so-called “duck, cover and hold” exercises and mass evacuations.

First held in July last year, the drill aims to prepare emergency responders and the general public for the “Big One,” or  the potentially devastating movement of the West Valley Fault which experts say is “ripe” for a strong quake. The 90-km fault system passes through Quezon City, Marikina, Pasig, Makati, Taguig, and Muntinlupa in Metro Manila, and the neighboring provinces of Bulacan, Rizal, Cavite and Laguna. (See related story on Page 1).

The fault is said to move every 400 to 600 years and its last movement dates back to 1658, or is 358 years ago, according to the Philippine Institute of Volcanology and Seismology (Phivolcs). 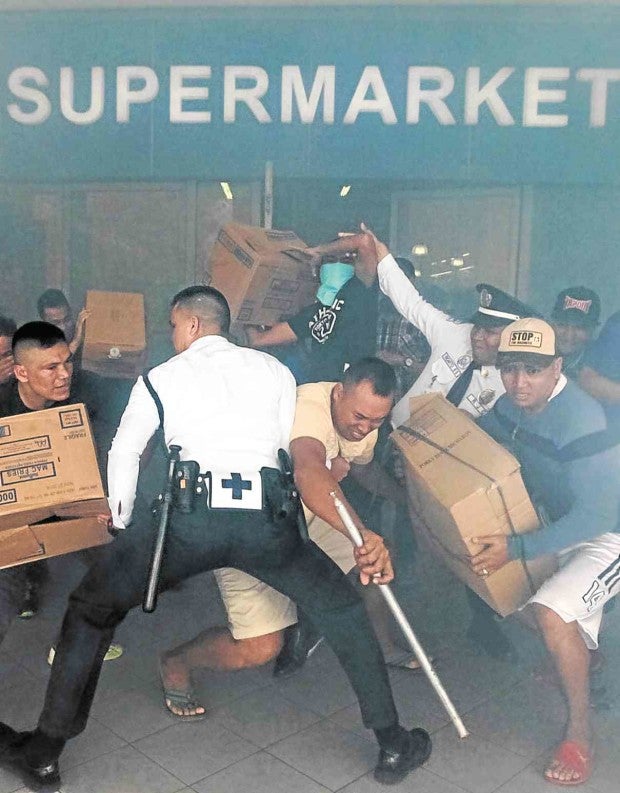 In Quezon City, hospital personnel conducted a bucket relay to put out a “fire” at Veterans Memorial Medical Center (VMMC).

As sirens blared to signal the start of Shake Drill, responders quickly arrived to clear the road and set up the field hospital, evacuation center and command post at the VMMC parking lot, the staging area for the Metro North Quadrant under the government’s disaster response protocol known as “Oplan Yakal.” The north quadrant covers Quezon City, Caloocan, Valenzuela, San Juan and Mandaluyong.

K9 units were used to detect people trapped in the hospital, while soldiers rappelled to rescue patients from a fire that broke out on the third floor of the cancer ward.

As part of the simulation, the command post’s radio room received a barrage of “reports” about collapsed structures, vehicular accidents, explosions, looting incidents, casualties and people trapped in high-rise buildings.

Elsie Encarnacion, the quadrant’s incident commander, recommended using the Firechat smartphone app, which was also downloaded by other members of the Incident Management Team. The app uses wireless mesh networking to enable smartphones to connect peer-to-peer even without an internet connection or cellular signal.

“Another area for improvement is a more fluid flow of communication among ourselves. We need more practice in handling our own tasks, particularly since there were an influx of resources (or volunteers),” Encarnacion said.

As an improvement from last year’s drill, the field hospital and the evacuation center were set up farther from the command center to accommodate more people, she added.

At the Manila Hotel, the evacuation involved just 65 or the 300 employees—and only a few guests who were at the lobby—while first-aid drills were performed at the back of the establishment. A trash can was also set ablaze at the parking lot for a fire-fighting exercise.

Guests were invited but not required to join out of respect for their privacy and personal schedules, said Nian Liwanag-Rigor, the hotel’s assistant vice president for corporate communications. “But our guests appreciate the fact that the hotel takes active part in this. I can say that we performed better now than during the first Shake Drill, since people were more prepared.”

The resident manager, Gerhard Doll, pointed out that the historic hotel holds its own earthquake drills twice a year.

In a statement, SM Supermalls said all its malls in Metro Manila took part in the drill, improving their time of complete evacuation to just five minutes—two minutes faster than their record last year.

Engr. Bien Mateo, the vice president for mall operations, said this year’s edition was much bigger since all SM Residences and SM office buildings participated, aside from the 20 SM malls in the capital. 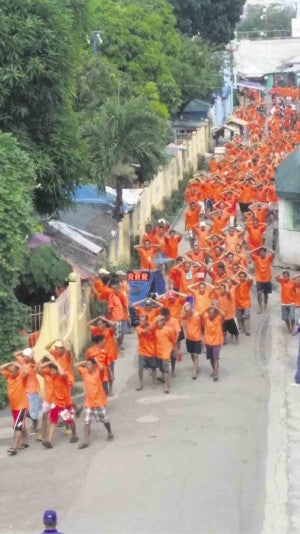 At SM City North in Quezon City, the fountain area along Edsa served as the staging area for a fire drill. SM’s own emergency and response team allotted areas for persons with disability, pregnant women and senior citizens.

Vehicles going to and from Quezon Memorial Circle were stopped for 30 minutes, causing a congestion in the area.

Employees of the Philippine Daily Inquirer took part by doing the duck-cover-hold exercise in their offices as the alarm bell rang for about 45 seconds, before taking the fire exits to evacuate the company’s four-story building on Chino Roces Avenue, Makati City.

The drill started just as the Inquirer Central Desk was holding its morning meeting to plan the day’s multimedia coverage—including that of the Shake Drill.

“We wanted to see just how good we would be in a situation like this because earthquakes don’t announce themselves. It’s good for us to see how we would have fared or reacted in case there was an earthquake and people would think that (the alarm) is just a glitch,” said Inquirer president Sandy Prieto-Romualdez.

“We need to take this seriously,” said Romualdez, who joined the rest of the employees as they gathered at the parking lot.

Barangay officials in Marikina City took the Shake Drill as a chance to demonstrate what they had learned about rescue and relief operations through training programs conducted by City Hall over the past few years.

Among the scenarios they focused on were road debris clearing, collapsed structure extrication, fire fighting, and responding to looting incidents.

City disaster officials said more than 2,700 individuals from both the government and private sectors participated.

At Riverbanks Mall, the police took about five minutes to arrive and intercept “looters.” The mall is located near the West Valley Fault.

Read Next
Marijuana courier in tears; Erap gives P100k to tipster
EDITORS' PICK
Acer starts the year off strong with the Aspire Vero National Geographic Edition
The best of bayside and city living at SMDC’s Sail Residences
EDITORIAL: Protecting the polls’ integrity
COVID-19 virus spread slowing down in Metro Manila, says OCTA Research
Over 3 Million worth of prizes to be won at Smart Padala’s SENDali Manalo Promo!
Comelec junks petition to scrap Bongbong Marcos COC
MOST READ
In Batanes, octogenarian dies of COVID-19
Drug lord Espinosa tried to escape through air vent at detention facility – NBI
When to get boosters after positive COVID test
Marcos Jr. visits Cebu, stands as ‘ninong’ to mayor’s son
Don't miss out on the latest news and information.