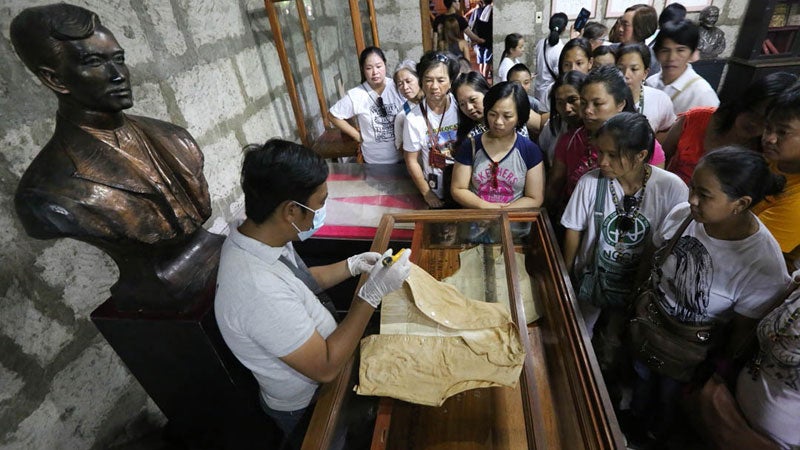 ON HIS 155th birth anniversary, Jose Rizal is remembered by most as the national hero of the Philippines who wrote two novels that inspired the Philippine Revolution against Spain, resulting in the emergence of the Filipino nation.

But there is more to Rizal than most people think. It is not well-known that Rizal is considered the Father of Philippine Komiks (comic strip) because among his numerous drawings and sketches are three that fit the bill: “The Monkey and the Turtle” (Paris, 1885), “The Baptism of R. Pfeiffer at Holy Cross Steinach” (Wilhelmsfeld, 1886) and “The Cure of the Bewitched” (Dapitan, 1895).

The first, a retelling of the Filipino folk tale “The Monkey and the Turtle,” was drawn in the scrapbook of Juan Luna’s ill-fated wife, Paz Pardo de Tavera, during a dinner in Paris in the fall of 1885.

The story is retold in 35 frames with text in Spanish under each panel instead of having the narrative flow in boxes above and dialogue text in speech balloons as we do today.

In a New Year letter to his family in 1886, Rizal narrated: “My mode of life doesn’t change. Luna and I eat here at the studio and as he has many friends at Paris, families who hold soirées at their homes often invite him. For this reason he eats outside often.

“The Pardo family who lives here also invites me to eat at their home from time to time. Then Luna, [Felix] Resurrección [Hidalgo], and I go there. On such days we do nothing else but talk about our country—its likes, food, customs, etc. The family is very amiable. The mother (widow) is a sister of Gorricho and remains very Filipino in everything. Her sons Trinidad and Felix Pardo are both physicians; her daughter Paz speaks French and English and she is very amiable, and also very Filipino.

“She dresses with much elegance, and in her movements and manner of looking she resembles Sra. Itching. She is beautiful and svelte and it is said she is going to marry Luna. She asked me to write something in her album and I wrote the story of the monkey and the turtle with illustrations. The young women in Europe usually have the custom of keeping an album (not of pictures) in which they ask their friends to put there drawings, dedications, verses, etc. and they keep them as souvenirs.”

Felix Pardo de Tavera, in a prewar interview with Francisco Villanueva, related: “My sister Paz, wife of Juan Luna, had an album where almost all the Filipinos who lived or passed through Paris wrote a piece, prose or verse, or drew a sketch. Paz asked Rizal to contribute, anything he liked. At the time Rizal and I had a discussion as to whether the fruit of the banana tree look upward or downward. Both of us had been away from the Philippines for many years. Rizal maintained that they look downward while I argued that they look upward. 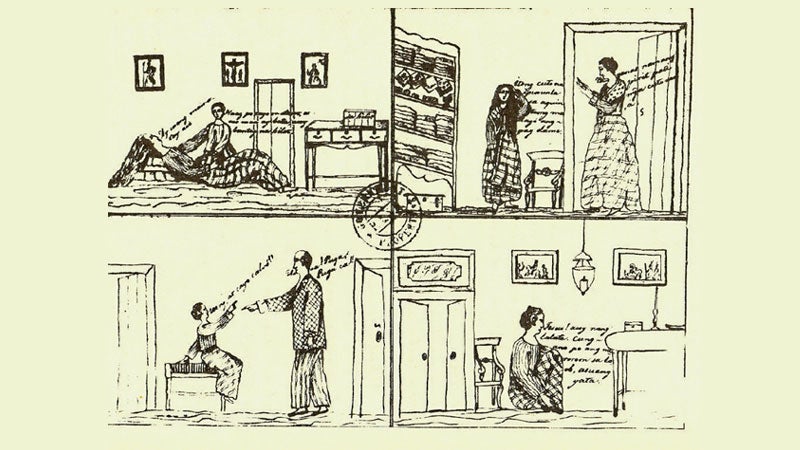 “We were then at the house of Paz. When my sister asked Rizal to write something in the album and handed the book to him, Rizal spontaneously and almost instantly drew the sketches wherein the monkey and the turtle are shown discussing. My nephew, Andres Luna, who is in Manila practicing his profession as an architect, has this album of his mother, where the original of Rizal’s drawing can still be found.”

The original album owned by Paz Pardo de Tavera was inherited by her son, the famous prewar architect Andres Luna de San Pedro, and was believed lost or destroyed during the Battle for Manila in 1945.

At present, the only reliable reproduction of the first Filipino comic strip is found in the 1914 “Lineage, Life and Labor of Jose Rizal, Philippine Patriot: A Study of the Growth of Free Ideas in the Trans Pacific American Territory” by Austin Craig.

The good news is that the original album that also contains sketches by Juan Luna, Felix Resurrección Hidalgo and other artists is extant and may perhaps be coaxed out of hiding by the astronomical prices fetched by Philippine art and antiques at local and international auctions.

The early Philippine comic strip by Rizal and the two other works mentioned above, now preserved in the National Library of the Philippines, prove that there is much more to Rizal that needs to be known, appreciated and celebrated.