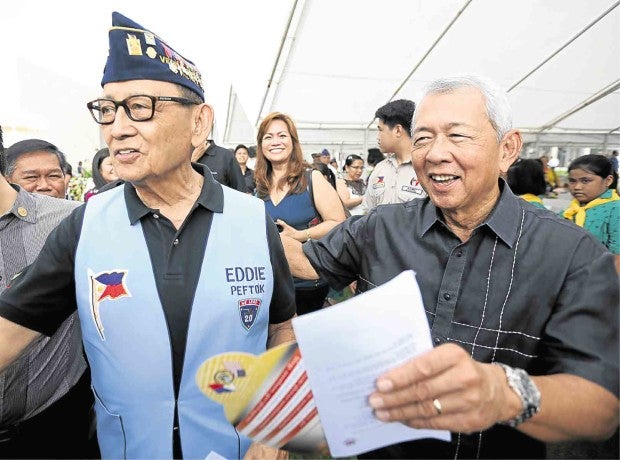 CITY OF SAN FERNANDO—Former President Fidel V. Ramos revealed a secret he has kept for two decades since the 1991 eruption of Mt. Pinatubo: One of the areas buried by lahar was being considered by his administration as site for a new city.

That area is now the Clark Freeport in Pampanga, Ramos said in a speech during a program honoring him and dozens more for their roles in saving Central Luzon from the catastrophic eruption of Mt. Pinatubo on June 15, 1991.

The Pampanga provincial government and private sector held the tribute at the Laus Group Event Center here in time for the 25th anniversary of the eruption, the world’s second largest in the 20th century.

Two other former Presidents, the late Corazon Aquino and Pampanga Rep. Gloria Macapagal-Arroyo, were among those honored.

Citing a study made by his public works secretary, Gregorio Vigilar, Ramos said Marawi City in Lanao del Sur, Cebu City and “the Mt. Pinatubo area” in Luzon were suitable for the creation of a new metropolis.

These areas met the standards for a major city, among them a ready food base, educational institutions, accessibility and a talented and dedicated human resource.
The study, prompted by the traffic nightmare and urban blight in Metro Manila, required Vigilar and his group to observe and attend conferences abroad, Ramos said.

“When I asked Vigilar, he whispered these [areas] to me in secret because he did not want [to trigger] real estate speculation,” Ramos said.

The few who knew of the initial plan were dumbfounded at the time because Mt. Pinatubo had just erupted and the areas around it were covered in thick volcanic sediments.

But Ramos had defended Vigilar’s choices, saying, “He could not go wrong, he is a civil engineer and a veteran of the Korean War.”