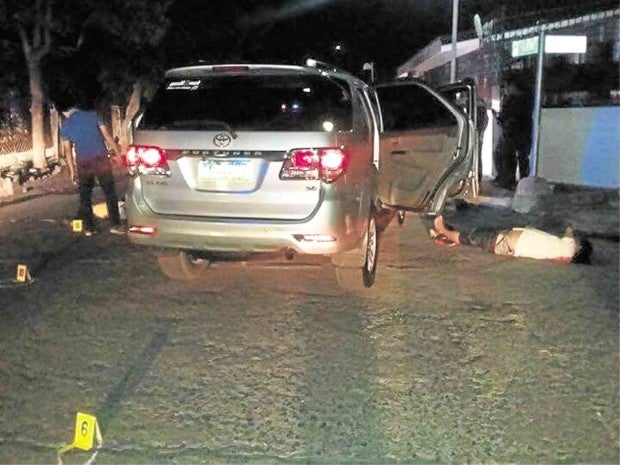 A POLICEMAN takes a closer look at the Fortuner used by suspect Jeffrey “Jaguar” Diaz, said to be Central Visayas’ No. 1 drug lord, and his driver, Paul Vincent Pansacala Igloria, when they clashed with policemen that led to their deaths in Las Piñas City on June 19. It was not immediately known whether the body that lay beside the SUV was Diaz’s or Igloria’s. PHOTO FROM ASPO UGBINAR AGRAVANTE’S FACEBOOK

CEBU CITY—Central Visayas’ top drug personality is dead. Jeffrey “Jaguar” Diaz, who started peddling illegal drugs in this city in the early 2000s, was shot dead along with his bodyguard, Paul Vincent Pansacala Igloria, 26, in what police said was a gunfight in Barangay Almanza 1, Las Piñas City, past 10 p.m. on Friday.

Half a kilogram of shabu was also seized from Diaz who, just last week, sent surrender feelers and claimed that he had become a changed man.

The subject of the operation, Alvaro “Baroc” Alvaro, however, managed to escape.

Supt. Rex Derilo, head of the police regional intelligence division in Central Visayas, said regional policemen went to Metro Manila as part of the manhunt for Alvaro, who has a pending arrest warrant for illegal drug charges.

He said the policemen didn’t expect to see Alvaro with Diaz in Las Piñas City.

Derilo, in an interview with radio station dySS here, said police found that Diaz and Alvaro “saw each other quite often” despite Diaz moving from one place to another to elude police.

Diaz, said Derilo in the dySS interview, “actually didn’t stay in one location longer than an hour.”

Modequillo said Diaz had been living “for years” in Las Piñas and bought houses and land in the city.

Modequillo said intelligence operatives, led by Derilo, received a tip that Alvaro was in Las Piñas and was using a beige Toyota Fortuner, a sports utility vehicle, with license plate YKZ 202.

Modequillo said the regional intelligence police coordinated with the Las Piñas police on June 13. On June 16, Modequillo said, the Fortuner was sighted being tailed “by an unmarked vehicle.” “But it disappeared,” said Modequillo.

On June 17, the Fortuner was seen again in an area in Las Piñas known as Marcos Alvarez “then it disappeared again,” said Modequillo.

Past 10 p.m. on June 19, Diaz and Alvaro were seen inside the Fortuner being driven by Diaz’s bodyguard, Igloria.

Police tailed the vehicle but failed to notice that Alvaro had disembarked from the SUV.

Las Piñas policemen, led by Modequillo, flagged down the Fortuner at the corner of Narra and Gem Streets in Barangay Almanza 1 and approached Diaz.

“The two men, the driver and Diaz, got off the vehicle,” Modequillo said. “The driver started shooting with an Armalite, while Diaz, who was also armed, fired his gun but the weapon malfunctioned.”

Modequillo said the police returned fire, killing the two on the spot.

Modequillo said the Cebu police placed the value of the illegal drugs at P600,000, but other policemen estimated it to be worth P1.2 million.

“We know how elusive he was and we’re very grateful our policemen got him,” he told the Inquirer over the phone.

On June 12, Diaz presented himself in an interview with a reporter from a radio station here during which he expressed his desire to surrender to President-elect Rodrigo Duterte.

He also apologized to his “victims,” saying he had stopped peddling illegal drugs since March 2015.

Comendador, however, had challenged Diaz to surrender to police and execute an extrajudicial confession to make formal his admission.

Comendador had expressed doubt that Diaz had stopped plying the drug trade.

Derilo said Diaz was still involved in illegal drug activities at the time of his killing.

Derilo said Diaz was a “big time drug personality” who got his supply from international drug syndicates.

As an alleged level one drug personality, Diaz could dispose of at least 5 kilograms of shabu, worth P59 million, every week.

Although he was a notorious drug personality, not a single criminal complaint was filed in court against Diaz.