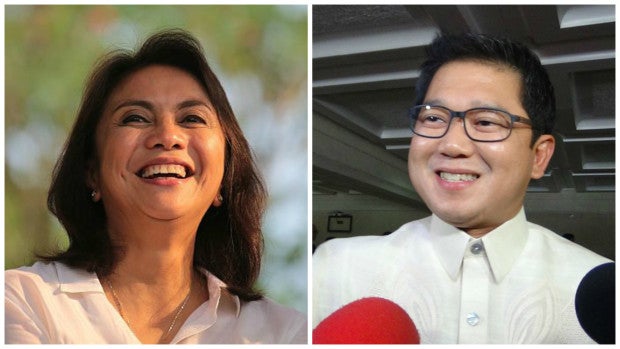 NO BAD BLOOD. Quezon City Vice Mayor Joy Belmonte denies that Mayor Herbert Bautista is unhappy he was uninformed that the VP-elect will hold office at the Quezon City Executive House. FILE PHOTOS

“We must fight lies with truth”.

Belmonte was reacting to an Inquirer report, saying that Bautista was displeased with the move to let Robredto hold office at the said property.

“For the record I wish to state that the Hon City Administrator is misleading the public with his statements in this article,” Belmonte said in a Facebook post.

“It is he who is unhappy with the Mayor’s offer for the VP to use the Executive House as he has verbally manifested many times, because she was not his preferred VP. We all know whom he publicly supported despite the Mayor’s being head of the Liberal Party in QC,” she said.

Contrary to the report, the vice mayor said Bautista was “very happy to lease the Reception House to VP Leni, even stating to me that it would be an honor to host the second highest official of the country.”

She said Bautista even reminded her “to hurry with drafting the contract of lease.”

“All of the data presented by the City Administrator to show the house is not complete and ready for occupancy are dated, and clearly he did not seek updates from the agencies involved such as the engineering department, and even the Commission on Audit – all of whom can attest otherwise,” she said.

Belmonte reiterated Bautista’s support for Robredo to use the Quezon City Reception House.

“I categorically reiterate my boss’ support for VP Leni’s use of the QC Reception House as her office, his having campaigned for her in the last elections and admitting personally to me that she is his ‘crush.’”

“This support is without reservation, and the offer was made with his full knowledge consent and encouragement. I condemn all acts that mislead the public,” she added.