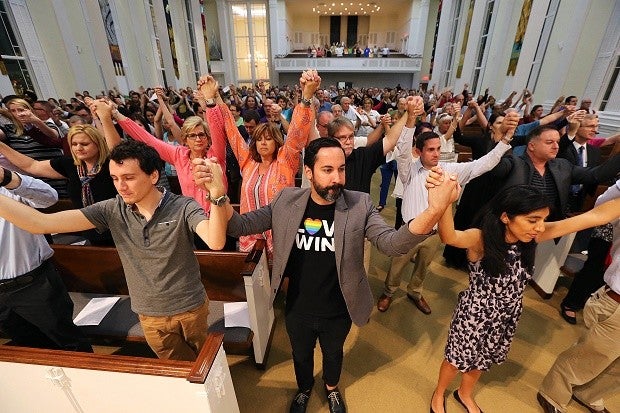 In this Tuesday, June 14, 2016 file photo, worshippers joins hands during an interfaith service at the First United Methodist Church of Orlando, Fla. A gunman killed dozens of people at a gay nightclub in Orlando on Sunday, making it the worst mass shooting in modern U.S. history. CURTIS COMPTON/ATLANTA JOURNAL-CONSTITUTION VIA AP

PHILADELPHIA — The massacre at a gay nightclub has tested the limits of the “love the sinner, hate the sin” approach to homosexuality by conservative religious leaders.

The faith leaders have overwhelmingly expressed grief over the loss of life in Orlando, led vigils around the country, offered counseling for the crowds of mourners and free funerals for the victims. But it has been less common for religious conservatives to note that the gunman specifically targeted lesbian, gay, bisexual and transgender people. Gays and lesbians say the omission compounds the pain of the shooting.

“This was a place where people came together — LGBT people — and if you erase that part of them, you’re not actually praying for people, you’re praying for an abstraction,” said the Rev. Paul Raushenbush, a gay American Baptist pastor and a vice president at Auburn Seminary in New York. “In order to truly honor these lives, we’re not going to erase them and we’re not going to erase them in church.”

Authorities are still trying to understand the motivation of gunman Omar Mateen, who had expressed hatred of gay people and sympathy for Islamic extremists before his rampage left 49 people dead at Pulse dance club last Sunday. The shooting has laid bare ideological divisions over gay rights, gun control and Islamic terrorism. Many conservatives argue that LGBT advocates are trying to politicize the attack by complaining about the wording of statements of prayer and concern.

However, Presiding Bishop Yvette Flunder of the Fellowship of Affirming Ministries Network, an association of mainly black and gay churches, pointed to the shooting at the historically black Emanuel African Methodist Episcopal Church in South Carolina a year ago, and noted, “we did not hesitate to say that the victims in Charleston were black.”

“This is a time to grieve, to mourn and to consider what it means to stigmatize people,” said the Rev. Raphael Warnock of the historic Ebenezer Baptist Church in Atlanta, who supports gay marriage as a civil right. “Religious communities have played a particular role in … marginalizing gay and lesbian and transgender people.”

The tragedy prompted an outpouring from more liberal religious groups that included special attention to LGBT people. Presiding Bishop Elizabeth Eaton, of the Evangelical Lutheran Church in America, said the gunman seemed to believe that “the LGBTQ community was severed from our common humanity.” The Central Conference of American Rabbis, which represents Reform Jewish clergy, said the group was “outraged that LGBTQ people have been massacred because of their gender identity and sexual orientation.”

Conservative religious leaders were just as vocal and emotional in their remarks, but the focus of their statements varied.

The Rabbinical Council of America, the major association for Orthodox rabbis, decried “murderous attacks in the name of religion” and said “no individual or group should be singled out” the way the victims were. The president of the US Conference of Catholic Bishops, Archbishop Joseph Kurtz of Louisville, Kentucky, offered prayers and called for “ever greater resolve in protecting the life and dignity of every person.” The Southern Baptist Convention, at its annual meeting this week, passed a resolution extending “love and compassion” to all affected by the shooting and saying they consider the victims “fellow image-bearers of God and our neighbors.”

But none of these statements specifically mentioned that gays and lesbians had been singled out.

On the other hand, the National Hispanic Christian Leadership Conference, an association for Latino evangelicals, which helped local churches organize a vigil Wednesday in Orlando, issued a statement calling for “radical love” for all, citing gays in particular, despite the conference’s theological opposition to same-sex relationships.

“We’ve preached to our people that everyone — every race, every culture, every orientation — they’re made in the image of God,” said the Rev. Tony Suarez, executive vice president of the leadership group, in a phone interview. “That doesn’t always mean we agree with everyone’s decision, but we respect their humanity.”

In St. Petersburg, Florida, Bishop Robert Lynch took the rare step for an American Roman Catholic bishop of saying faith groups had a role in fueling violence like what happened in Orlando.

“Sadly, it is religion, including our own, which targets, mostly verbally, and also often breeds contempt for, gays, lesbians and transgender people,” Lynch wrote on his blog. “Singling out people for victimization because of their religion, their sexual orientation, their nationality must be offensive to God’s ears. It has to stop.”

The Rev. Joel Hunter, pastor of the evangelical Northland, A Church Distributed, in the Orlando area, said the attack and its aftermath have led him to reflect on how he has spoken about the Bible and LGBT people in the past.

Hunter, who has been a spiritual adviser to President Barack Obama, spent the week in community meetings and at events in response to the shooting, leading to the pastor’s first introduction to Carlos Smith, the government affairs officer for Equality Florida, an LGBT advocacy group. A photo of their handshake, taken by a local reporter, has drawn attention on social media.

“The fact that I didn’t know him was indicative of the cubicle all of us have been operating in and my lack of relationships that I’m now regretting,” Hunter said in a phone interview.

“My relationships and respect for LGBTQ people will not depend on any specific theological finding,” Hunter said of how he will re-examine his approach to gays and lesbians. “My recommitment is to focus on living out the basic nature of God — love — and leaving the judging up to Him.”