Orlando buries its dead in wake of gay club massacre 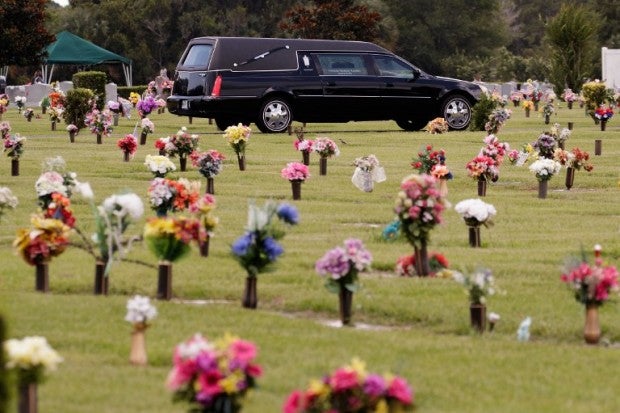 A Hearse that carried the body of Kimberly Morris drives through the cemetery after the burial for Morris, June 16, 2016 in Kissimmee, Florida. Morris, who worked as a bouncer at the Pulse Nightclub, was killed in the shooting. The shooting at Pulse Nightclub, which killed 49 people and injured 53, is the worst mass-shooting event in American history. GETTY IMAGES/AFP PHOTO

MIAMI—Orlando turned to burying its dead Friday, with funerals for at least five of the 49 people killed in a massacre at a gay nightclub — the deadliest mass shooting in US history.

More burials were expected over the weekend as the resort city better known for theme parks like Disney World struggles to recover from the shooting by lone gunman Omar Mateen, who ran amok with a legally purchased assault rifle and pistol and was killed when police stormed the club.

One of those buried Friday was Anthony Luis Laureano Disla, a 25-year-old dancer who traces his heritage to Puerto Rico, the community hardest hit by the massacre.

“He was a very talented dancer who was loved and will be missed by all,” his obituary at the Newcomer funeral home read.

Three others buried Friday were also in their 20s, while the fifth was a 50-year-old man, according to local TV station WKOW.

The process of saying goodbye began Wednesday with a wake for Javier Reyes, a 40-year-old salesman also of Puerto Rican origin. The first burial was held Thursday in Kissimmee, an Orlando suburb.

Puerto Rico is grappling with the pain of loss and repatriating the bodies of some 24 islanders whose lives were cut short in the carnage early Sunday at Orlando’s Pulse nightclub, which was hosting a Latin party.

Officials say Mateen pledged allegiance to the Islamic State group in his final hours of life inside the nightclub. But witnesses said he had frequented the gay club in the past and used gay dating apps, raising questions over the motive for the attack.

While Mateen passed a psychological evaluation in 2007 as part of his application to become a security guard, his employer — US government contractor G4S — did not give him another one during his nine-year tenure at the firm, despite two FBI inquiries into Mateen in 2013 and 2014, NBC News reported, citing unnamed sources.

CNN, also citing unnamed sources, reported that Mateen recently added his wife Noor Salman to his life insurance policy and gave her access to his bank accounts, suggesting the attacks were premeditated.

Mateen had been disciplined 31 times in elementary school between 1992 and 1999 for disrespectful and sometimes violent behavior, as well as using obscene language, according to local media outlet Treasure Coast News. He was also a very poor student.

Meanwhile, aid to families kept flowing through a center set up at a sports stadium.

A total of 94 families have received aid — including such things as free plane tickets for grieving relatives to fly to Orlando — since the center was set up Wednesday, Mayor Buddy Dyer told a news conference.

Families are also being offered counseling, money for medical care and funerals, and help in getting visas for people seeking to come from abroad to claim bodies.

In one case, 16 members of one family showed up seeking information about burying their loved one. In the end, the different agencies working out of the assistance center together found ways to help that family, said Amy Decker of the American Red Cross.

As funeral preparations continued, the ultra-conservative Westboro Baptist Church convened a rally near a church where two wakes will be held Saturday, according to its website.

The church regularly stirs controversy by picketing military and other funerals with signs saying “Thank God for dead soldiers” and “God hates fags.”

After meeting with victims’ families in Orlando on Thursday, President Barack Obama said “our hearts are broken too” and insisted the tone of the country’s hyper-partisan debate on firearms needs to change.

Relatives of the victims “don’t care about the politics. And neither do I,” Obama said.

The Republican-controlled US Congress has steadfastly refused to pass any new gun legislation, saying to do so would infringe on the constitutional rights of gun owners.

In response to the shooting, Republicans have called for tougher counterterrorism measures and for the Obama administration to do more to fight the Islamic State group.

Meanwhile, Republican presidential hopeful Donald Trump told supporters in Texas on Friday night that the tragedy could have been avoided if club-goers were armed.

“If some of those wonderful people had guns strapped right here, right to their waist or right to their ankle and this son of a bitch comes out and starts shooting and one of the people in the room happened to have it and goes ‘Boom, boom’ you know what, that would have been a beautiful, beautiful sight, folks,” the bombastic New York businessman said to raucous cheers.