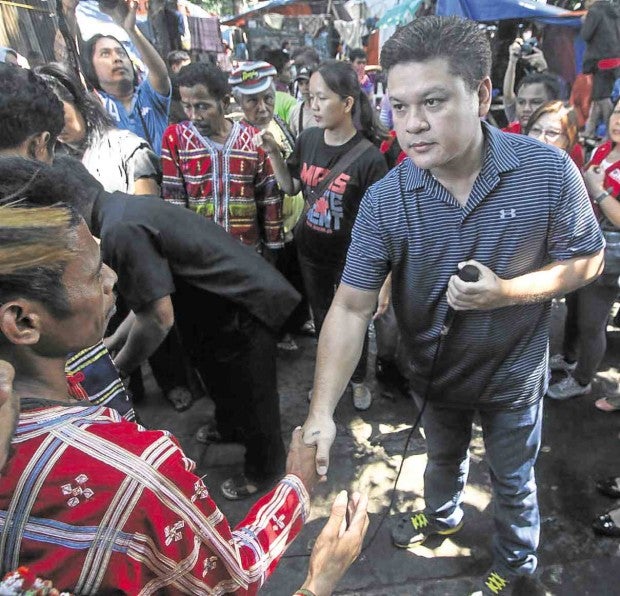 DAVAO CITY—He had it coming.

In a mad rush to keep his wife from blowing a fuse, he drove his black Toyota Hilux pickup at 57 kilometers per hour, or 17 kph more than the speed limit of 40 kph in this city.

The next thing he knew, he was being flagged down by traffic enforcers, never mind if he is the son of President-elect Rodrigo Duterte.

Vice Mayor Paolo Duterte knew there was nothing he could do when he was apprehended in Barangay Bangkal here early Friday for violation of the city’s speed limit ordinance.

Duterte, who made the announcement on his Facebook page, said he was rushing home when he was signaled to stop by traffic enforcers.

“We’ve been reminded that we should limit it at 40 kph. This is what I got for rushing because my commander (wife) was angry. Got flagged down for driving at 57 kph. We are all even now,” Duterte said.

He also posted a photo of the temporary operator’s permit issued to him in lieu of his license, which was confiscated by the traffic enforcers.

Duterte said he was driving home past 4 a.m. when he was “ambushed” by speed gun-wielding traffic enforcers. It was his first time to be accosted for violating the speed limit ordinance, he said.

Under the 2013 city ordinance regulating the speed by which vehicles could run in various areas of the city, first-time offenders will pay a fine of P2,000 and those who violate the speed limit a second time will be fined P3,000.

Repeat offenders face a fine of P10,000 and revocation of their driving license.

In the downtown area, no vehicle should run more than 30 kph.

The vice mayor took the incident lightly and even joked that his younger brother, Sebastian, should also experience getting fined for the same offense.

“But Basti won’t be apprehended because there is no speed limit for surfing, OK? You guys really wanted all of us to be apprehended. You are so harsh,” he said in jest.

On Jan. 13, 2014, former Mayor Sara Duterte was also flagged down by a traffic aide after she was caught speeding while driving her white SUV along Quimpo Boulevard.

The Traffic Management Center said Sara was driving at 57 kph, which was beyond the 40 kph speed limit in the area. The incoming President’s daughter said she thought the speed limit on Quimpo Boulevard was 60 kph.

Aside from the Duterte siblings, several other prominent personalities had been fined for violating the city’s speed limit ordinance.

In September 2009, the President-elect himself was flagged down by traffic enforcers although for a different offense—failure to wear a helmet while driving his motorcycle along Sandawa Road.

The elder Duterte was made to pay a total of P1,777.63 in fines and was required to attend a driver’s seminar before his license was released.

In December 2015, Bayan Muna Rep. Carlos Isagani Zarate was driving along MacArthur Highway on his way home from a drugstore downtown when a traffic police officer flagged him down.

“I was startled when a uniformed police officer suddenly waved for me to stop,” he said in a post about the incident on his Facebook page.

He said after “courteously” greeting him, the police officer, whom he later identified only as an SPO1 Mallonga, showed him the numbers on the speed gun,  which indicated 54 kph. The speed limit along the highway was only 40 kph.

“I was speeding in a 40-kph speed zone. Speed limits apply at all times—day and night in our city. No ifs, no buts,” Zarate said.