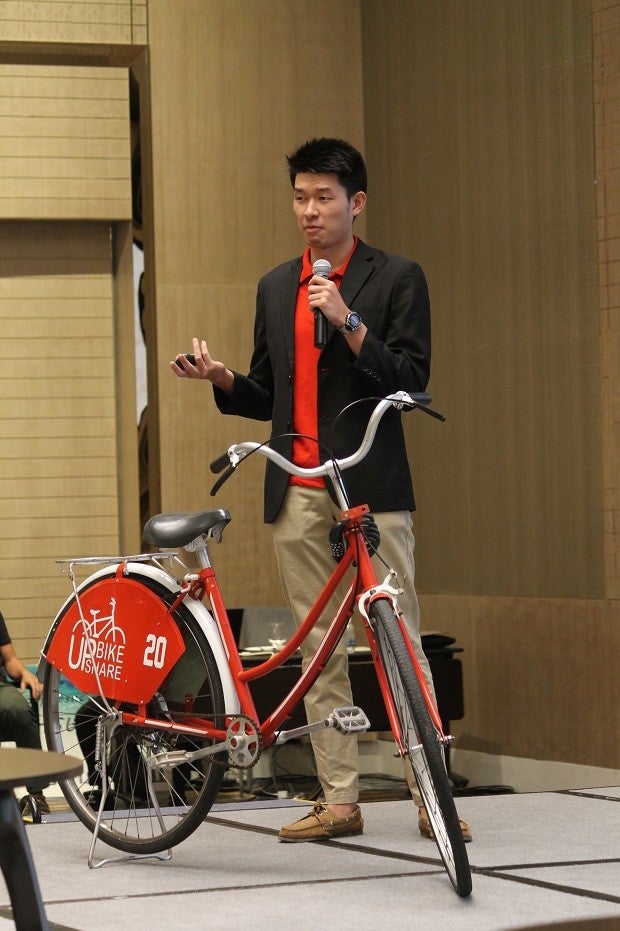 The UP Bike Share program presented at the “Hack the CBD” competition which was part of a one-day event focused on the problems in mobility and the role of smart urban planning in solving congestion of traffic in the country. INQUIRER PHOTO

Five University of the Philippines-Diliman students emerged victorious in the first-ever “Hack the CBD” competition among urban mobility enthusiasts earlier this week.

The team, composed of Shawn Gabriel Lee, Andrew Escay, Elijah Mojares, Miguel Mercado, and Miguel Laperal, bested four other teams in the final round with their winning pitch about the potential a fourth generation bicycle-sharing program had to decongest traffic in Metro Manila.

Their idea? Take a bike, use it, and lock it for the next rider to use.

“It’s an on-demand form of public transportation using bikes. That’s actually what we have running around right now. We offer up to 47 bikes to students around UP Diliman, and what we’re developing is to eventually make it into a smart system that we can make not only for UP but for other cities,” Lee said.

Hand in hand with the physical bike are the three ingredients that they believe contribute to the success of UP Bike Share: Smart lock, low-power tracking using smartphones, and software analytics to keep it efficient and ensure user and administration security.

Although the team has conducted successful tests in the University of the Philippines, they said they still face problems encouraging cities to be more bike-friendly.

“What we learned is it’s a big chicken-and-egg situation. On one end it might not be biker-friendly; but on the other, it might be a way to start that culture. If we involve more communities, then we can force a change of perspective,” Escay added.

The team’s innovation stood out from 40 other pitchers, and four competitive finalists.

One of the finalists was Team Metropod, which believed that the way to decongest traffic is to make use of a small vehicle called a Metropod that can easily traverse narrower barangay roads as opposed to cars that fill up main roads like EDSA and C5.

Team Loop, on the other hand, created an app that integrated different transportation modes to make it easier to book rides.

Lastly, Team Pasabay.ph, the group with the youngest competitors (10th, 11th graders, and a college student), encouraged carpooling in communities such as schools.

READ: Will Pinoys warm up to UberPOOL?

UP Bike Share says it plans to use the prize money for research and development and to keep their operations safe and accessible.

Hack the CBD was part of a one-day event focused on the problems in mobility and the role of smart urban planning in solving congestion of traffic in the country. The event was organized by the Urban Land Institute, a nonprofit, multidisciplinary real estate forum that is “dedicated to creating better places,” according to its website (uli.org)

The event was keynoted by urban mobility and transportation expert Gabe Klein, a former director at car-sharing startup Zipcar and former commissioner of the Chicago Department of Transportation.

Klein discussed the history of mobility and urban planning, the effects of innovation on mobility, and the importance of cooperation between the public and private sector in implementing changes. The keynote was followed by a discussion of the presentation by transportation experts, the pitch battle, and the awarding ceremony.

Inquirer Mobile was one of the partners for the event.

“We’ve long realized that good things can happen when you put bright people with good ideas in the same room as influential people with deep resources. We wanted to open up a venue for these groups to get together and talk about solutions to issues or problems they feel strongly about,” said Anjo Mendoza, president of Inquirer Mobile.

Mendoza noted that the event drew responses from outside the software development community.

“I love that we were able to attract a cross-section of inventors, engineers, developers and students. We had professionals, college and even high-schoolers participate in the pitch battle,” said Mendoza, “The solutions were as varied as the participants, all of them really good and well thought of. Best of all, we received emails from individuals who had no intention of joining the competition but who just wanted to share their solutions to the Metro traffic mess.”

Urban mobility expert Klein was impressed by the ideas presented to the panel of judges.

“I’ve noticed a few things since I’ve been here, one is that there are a lot of really smart people, well educated people, also really friendly and open-minded people, so I could say, just based on that I had a really good feeling about it,” he said. CDG

Hand signal? We could have just met with Sotto sans Lacson, says Robredo