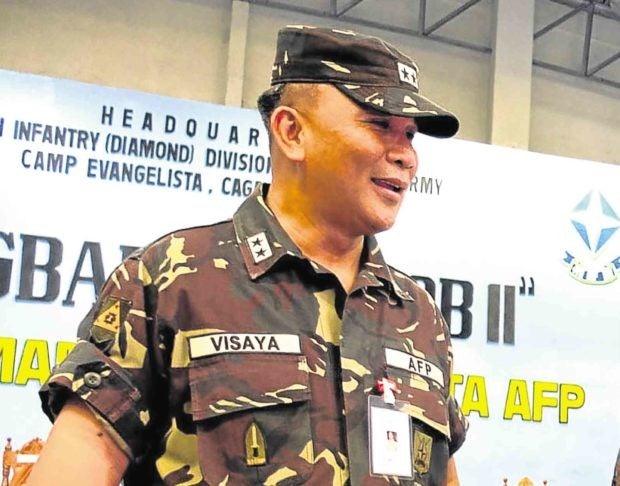 Declaring martial law in areas of Jolo and Basilan where the Abu Sayyaf Group is the strongest is being considered by the military, the incoming chief of staff of the Armed Forces of the Philippines said on Thursday.

Lieutenant General Ricardo Visaya, commanding general of the Southern Luzon Command, said they will study the possibility of placing the said areas under martial law so they can recommend it to President-elect Rodrigo Duterte.

“If positive ‘yung outcome ng pag-aaral namin, we can recommend that to the incoming President,” he told reporters.

(If the outcome of our study is positive, we can recommend that to the incoming President.)

“’Yung pag-declare ng martial law doon sa Jolo and Basilan, nakita naman natin na parang there is a failure of governance, so perhaps that is one option that can be undertaken para ma-establish ang order,” he added.

(Regarding the declaration of martial law in Jolo and Basilan, we saw that there is a failure of governance, so perhaps that is one option that can be undertaken to establish order.)

On Wednesday, President Benigno Aquino III admitted that he considered placing the remote island of Sulu under martial law, weeks before the June 13 deadline set by the Abu Sayyaf for the ransom of its Canadian hostage.  He later rejected the idea because it was no guarantee that the hostages would be rescued.

Aquino held high-level security meetings with military commanders on the island on Wednesday.

Canadian Robert Hall was beheaded early this week after the ransom deadline was not met. His fellow Canadian John Ridsdel was also killed last April because no ransom was paid.

The government is negotiating for the release of Norwegian Kjartan Sekkingstad and Filipina Marites Flor. The four were abducted on Samal Island last September.

“Perhaps martial law can be also an answer to prevent the Abu Sayyaf from continuing their kidnapping activities,” Visaya said.

There are currently 11 battalions deployed in Jolo, the incoming AFP chief said. A battalion is composed of about 400 to 500 soldiers.

(We have already enough troops but the problem, as you can see, is the terrain; it’s hard to search because of that. They create underground tunnels so it’s really hard to locate them, and perhaps if there’s an imposition of martial law, we could control their movements.)  JE/rga