The People for the Ethical Treatment of Animals (PETA) Asia staged a protest in front of Hermès store in Makati City on Thursday against the use of ostrich leather in making its handbags.

The group put up standees of life-sized ostriches outside the store while two women raised signs which read: “Hermès: Accessories to Murder.”

The standees, the group said, symbolize the birds’ desire to “get their skins back.”

The lightning protest, which marked the first time that the group held a protest in an Hermès store in the country, only lasted for about five minutes as the protest materials were dismantled and confiscated by security officers.

Even photographers who covered the event were prevented to take photos and were shooed by mall security.

In an interview, PETA Asia campaign director Jana Sevilla said that despite the protest being cut short, she considered it a success.

Sevilla said that they staged the protest to express their unequivocal opposition to the slaughter of ostriches for their skin.

“As we all know, this store, Hermès, they sell bags and other products made of exotic skin, which is the skin of ostriches. We want to show everyone that it is not right to use the skin of other animals to make bags, handbags, shoes, belts, wallets and that there are a lot of alternatives to these exotic skins. And we want to send out a clear message that we are against it,” Sevilla said.

PETA has waged protests in front of other Hermès stores in various parts of the world, such as in London and Kuala Lumpur, over the killing of ostriches. 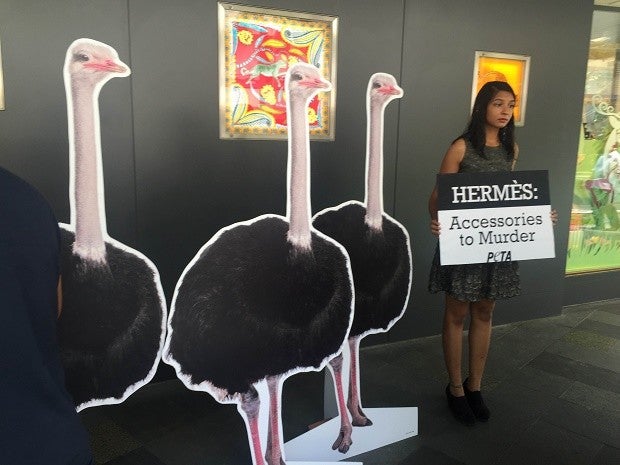 A protester from the People for the Ethical Treatment of Animals (PETA) stands in front of a Hermès store in Makati City. ARIES JOSEPH HEGINA/INQUIRER.net

The international group first released an exposé early this year alleging that one-year-old ostriches are being kept in barren dirt feedlots until their throats are slit and their feathers plucked out–creating the skin used for handbags.

“In the wild, they live up to 40 years or more but in farms they only live up to one year old. After their first birthday, they are sent to slaughter…so it’s really a violation of the animal’s rights,” Sevilla added.

In an earlier statement, Hermès denied PETA’s claims, saying that they get their ostrich leather from tanneries subjected to strict internal checks.

“Contrary to what the video broadcast by [PETA] suggests, the farms shown in the videos do not belong to Hermès. Hermès operates at a secondary level within this industry. The small quantities of ostrich leather used by Hermès do not come from farms but tanneries which, as per all Hermès suppliers, are subject to permanent and stringent controls,” Hermès was quoted as saying.

The luxury fashion house also said that it has been always “active and vigilant” with regard to its corporate social responsibility and lamented the “relentless” attacks by PETA to tarnish its reputation through a “dishonest representation of facts” and “a complete ignorance of the deep ethical commitment of Hermès to the fight against animal cruelty.”

Sevilla said that Thursday’s protest would not be the group’s last.

“If they continue to sell ostrich skins, if they still continue to murder ostriches, then we will not stop,” she said. CDG/rga

Read Next
Trillanes ‘deeply saddened’ by Aquino veto of nurses bill
EDITORS' PICK
Why Tagle is a leading papal contender
A laptop that maximizes your WiFi so you can maximize your productivity
Powered by style, innovation and passion
House energy committee chair Arroyo bats for cheap electricity
PH resumes talks with China on Chinese-funded transport projects
PH may import sugar around October if supply runs out
MOST READ
PVL: Celine Domingo gets big surprise as Creamline’s Finals MVP
John Arcilla cries foul over death threats for his ‘Ang Probinsyano’ role: ‘Serye lang, walang personalan’
Imee Marcos bares illegal importation of white onions
Why Tagle is a leading papal contender
Don't miss out on the latest news and information.