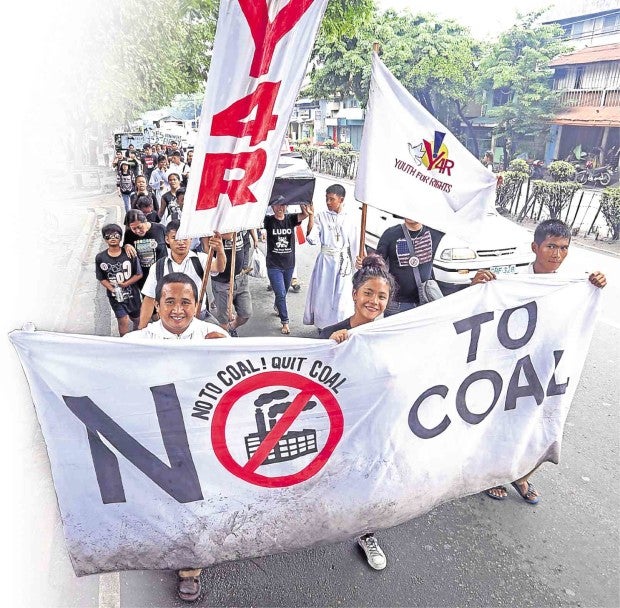 A demonstration in Cebu City is reminding incoming members of the city council to stand by a resolution rejecting a proposed coal power plant in the city. LITO TECSON / CEBU DAILY NEWS

The Climate Change Commission (CCC) said it has started a “comprehensive review” of the government’s energy policy, which is expected to reshape the country’s power development plans and replace coal with renewable sources of energy.

The CCC, together with key government agencies, has six months or until the end of the year to conduct a national review and craft a framework development on energy based on a resolution it issued last month.

The Commission is under the Office of the President and is the lead policy-making body of the government mandated to coordinate, monitor and evaluate state programs and ensure mainstreaming of climate change in national, local and sectoral development plans toward a climate-resilient and climate-smart Philippines.

“A comprehensive review of the government’s energy policy involves a whole-of-nation approach to achieve a low-carbon development pathway and national goals and targets for climate change mitigation and adaptation, disaster risk reduction and sustainable development,” the CCC said in a statement.

Secretary Emmanuel de Guzman, vice chair of the CCC, said the policy review was vital to fulfilling the country’s commitments under the Paris climate agreement to keep global temperature rise below 1.5 degrees Celsius and avoid the worst impacts of climate change.

“With time running out to address climate change and prevent the worst effects of rising temperatures, countries must act fast and more decisively to cut down their respective greenhouse gas (GHG) emissions in order to keep global temperature rise to below 1.5C,” De Guzman said at the launch of the National Energy Policy Review at the Kalayaan Hall in Malacañang.

“One sure way to defuse the ‘ticking time bomb’ of global warming is to shift away from fossil fuels to renewable energy (RE), which is the main thrust of the most recent resolution issued by the Climate Change Commission and signed by no less than the President,” he added.

De Guzman said the CCC strongly believes that “transitioning away from coal is a cost-effective path to a low-carbon economy for the Philippines.”

To ensure the success of the undertaking, De Guzman said the Commission would facilitate at least three meetings of the CCC Advisory Board, serving as steering committee; three sub-national business summits; 10 roundtable discussions; and 10 technical working group meetings throughout the six months of the policy review process.

He said the CCC and other key government agencies aimed to come up with concrete measures that would “lay the ground toward clearer procedures away from coal and on the faster way to enhance RE” like solar, wind, geothermal and hydroelectric.

“Our worthy task will allow us to fulfill our responsibilities, as public servants, to serve and protect our people from this global threat, and will inspire us, as human beings, with greater capability to sustain humanity,” De Guzman said.

While the Philippines was not a major emitter of GHG, he said, it could allow its economy to grow with the ways that triggers the climate crisis, which he said affects the country and other vulnerable nations.

“Let us send a message to the world that if a small country like ours could make a big difference, what more can be achieved with economic superpowers doing their share to ensure a low-emission and climate-resilient future,”  De Guzman said.

“We cannot let humanity live in a world fraught with dangers to life and wellbeing,” he added.

De Guzman said bending further the global warming curve to below 1.5C was a “moral imperative” as it means saving the lives and livelihoods of hundreds of millions of people, upholding the human rights of the poor and the vulnerable, and ensuring the integrity of our ecosystems.

“Through a whole-of-nation approach for our energy policy review, I am confident that government agencies will work together to harmonize policies and regulations in accordance with the low carbon development pathway.”

“Rest assured that the CCC, with its leadership mandate, will ensure that efforts of government agencies on RE development are integrated and coherent, and that the country remains on track and on time in meeting its targets,” the CCC official added./rga