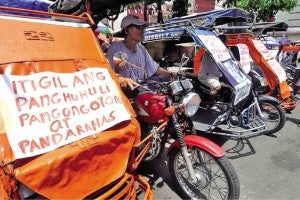 MANILA — A former overseas Filipino worker has filed a complaint against a traffic policeman for allegedly demanding P7,000 and refusing to release his kuliglig (improvised vehicle), which figured in an accident in 2015.

In his affidavit submitted to the MPD general assignment section, Darunday said Voluntate held his kuliglig after his driver and Reynaldo Soliveres, of the Department of Labor and Employment, figured in a road accident last December.

Darunday said he kept coming back to TEU’s headquarters but Voluntate was always out. After a month, he finally saw the traffic cop and was told that he needed to pay Soliveres in order for him to retrieve his kuliglig.

Voluntate called Soliveres on the phone to ask him to come to his office. At the traffic bureau, Soliveres allegedly demanded P10,000 initially. But Darunday said during the negotiation, he was asked to pay P7,000.

Darunday said the negotiation failed after Voluntate and Soliveres asked him to sign an agreement without even showing him photos of the damage to his vehicle. The two also refused to show him the extent of damage in Soliveres’ sedan, a Kia Rio 2015 model.

Darunday said he waited for the formal filing of a case but there was none upon checking at the fiscal’s office in Manila this month.

MPD-GAS summoned Voluntate and he’s expected to appear for a hearing on Thursday (June 16).

The kuliglig is a popular improvised vehicle in Philippine provinces which runs on a two-wheeled tractor at the front and two wheels at the back.  In Metro Manila, the term kuliglig refers to tricycles and pedicabs.  SFM/rga