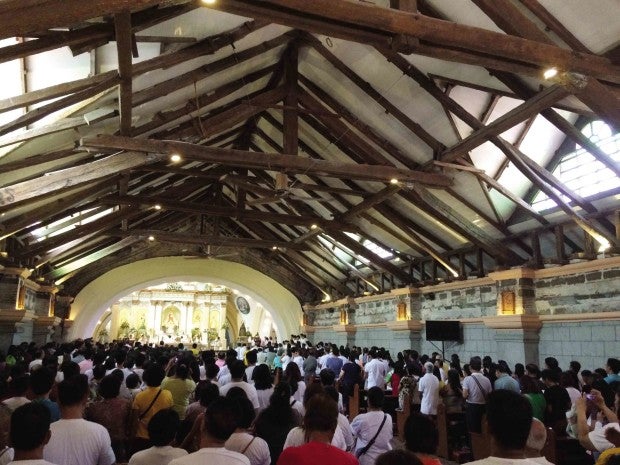 BACOLOR, Pampanga—At least 3,000 survivors of Mt. Pinatubo’s eruption and lahar flow in 1991 marched to a lahar-buried church here on Wednesday in remembrance of the disaster and to celebrate the people’s resiliency in overcoming the tragedy.

The commemorative walk, held for the 25th anniversary of the June 15, 1991 eruption, reached a kilometer long from the Archdiocesan Shrine of Our Lady of Lourdes to the San Guillermo (St. WIlliam the Hermit) Church.

The survivors marched with the image of the Virgen de los Remedios, patroness of Pampanga, carried by members of Knights of St. Peter from the coastal town of Apalit.

They were with Pampanga Gov. Lilia Pineda and businessman Levy Laus, chair of the Mt. Pinatubo executive committee, which organized events for the anniversary of the eruption, the world’s second largest in the 20th century.

Bacolor was all but erased from the map as lahar overflowed from the Pasig-Potrero River. The worst rampage came on Oct. 1, 1995 when Typhoon “Mameng” struck the area.

UNSHAKEN. Among Filipinos, people in Pampanga experienced the wrath of the Pinatubo volcano whose eruption on June 1991 and lahar flows until 1997 buried their lands, killed their loved ones, made them poor and entombed their communities. They say they have survived on faith in God and through a deep sense of optimism. PHOTOS BY TONETTE T. OREJAS/INQUIRER CENTRAL LUZON

Aniceto congratulated them for keeping faith in God during the disaster and thanked officials, foreign governments and nongovernment organizations for helping the people get back on their feet.

Pampanga, Tarlac and Zambales provinces bore the brunt of the eruption and lahar rampages.

The government built 20 upland and lowland resettlement centers which still host 100,000 families displaced by the disaster that lingered until the 1997 lahar season.

Erlita Tan, who cooks and offers laundry services for a living, described her current condition as “mekabyus (a difficult problem that could be resolved).”

But Tan, 52, said she is still far from “kanawan (comfort)” because her income is just enough for food for the family. She left the Bulaon resettlement for lack of farms or livelihood opportunities there.

Aida Carlos-Ishikawa, a director of the Center for Emergency Aid and Rehabilitation, said, “It is to the credit of Mt. Pinatubo victims that they survived amid insufficient support or inappropriate response by government.”

She said a key lesson offered by the Pinatubo disaster is that survival hinged on the survivors themselves. “They were actors, not simply recipients of help,” said Ishikawa.

The role of government, she said, should be to make the people more prepared for disasters “by providing lands, jobs, capital for enterprises and protecting the environment to ensure natural resources for communities.”

Pineda said the eruption is a blessing in disguise as it gave Pampanga “lots of sand that would last for a hundred years or more.”

The sand extraction industry has become one of Pampanga’s biggest sources of revenue, generating some P1.9 billion in taxes.