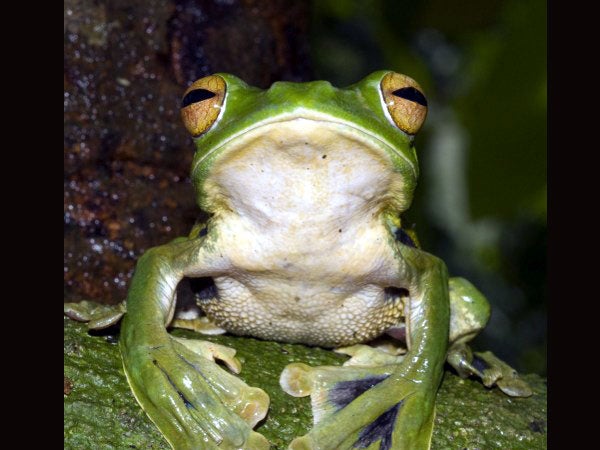 PARIS, France — The Bombay night frog, scientists revealed Tuesday, favors a mating position previously unknown among the amphibian group’s 7,000 species, only the seventh cataloged in what might be called the Kamasutra for frogs.

Dubbed the “dorsal straddle,” the new nuptial is an evolutionary case study in how sexual selection always finds a way — no matter how contorted or acrobatic — for sperm and egg to hook up.

Scientists led by SD Biju, a professor at the University of Delhi, staked out a dense forest near Humbarli village in the state of Maharashtra, western India, for 40 nights to catch their tiny quarry, Nyctibatrachus humayuni, in flagrante delicto.

Shorn of its context, their description of the exotic act could have been lifted from a 1970s sex manual.

“The male does not embrace the female, but straddles over her back with his hands holding, or resting, on a leaf, branch or tree,” they write, setting the scene.

At this point, the female — preparing for the next move — releases her eggs onto the leaf upon which the couple is perched.

Things get pretty kinky from there.

“The male ejaculates on the female’s dorsum and the sperm subsequently runs from her back and hind legs, before fertilizing the eggs,” the researchers explain in a study, published in the scientific journal PeerJ.

The frogs are millimeters apart during all this, but in most cases never touch — a sort of Tantric sex for croakers.

Having discreetly moved aside during the last phase of this ritual coupling, the male puffs out his cheeks and hovers over the eggs.

It might be to protect the future frogs from snakes, which — in another first, scientists say — sometimes snack on them.

Assuming they have escaped that fate, the eggs eventually dribble off the leaf and fall into a stream below, where they develop into tadpoles.

“This is a remarkable frog with unprecedented reproductive behavior,” Biju said in a statement.

“This discovery is fundamental for understanding the evolutionary ecology and behavior in anuran amphibians,” he added, using the scientific name for frogs.

The uniqueness of the N. humayuni doesn’t end there.

All male frogs call to attract mates. But in this species the female does as well, though scientists are not sure what evolutionary purpose it might serve.

Indian night frogs split off from other frogs some 70 to 80 million years ago, making them a very ancient group.

In another, more common, sexual embrace among these amphibians — called inguinal amplexus — the male “clasps the female around her waist.”

This is considered to be “the ancestral state,” the researchers explain.

Something akin, perhaps, to the missionary position.

Read Next
North Korea may have 21 nukes or more — US think tank
EDITORS' PICK
Over 3 Million worth of prizes to be won at Smart Padala’s SENDali Manalo Promo!
‘Not yet the end’: Lawyer says Marcos Jr’s DQ cases to take lengthy process
Critical scenario: 3 Comelec vacancies just 3 months before elections
Acer starts the year off strong with the Aspire Vero National Geographic Edition
The best of bayside and city living at SMDC’s Sail Residences
PH logs 37,070 more COVID-19 cases; over 33K others recover
MOST READ
Duterte asks: ‘Is COVID-19 airborne?’ Duque blames spread on ‘token compliance’ with rules
Morissette Amon recovering after confinement for diverticulitis, tests positive for COVID-19
‘Not yet the end’: Lawyer says Marcos Jr’s DQ cases to traverse lengthy process
Marcos camp ‘extends hand of unity’ after COC cancellation bid is thrown out
Don't miss out on the latest news and information.