Club shooting survivor feels guilt for getting out alive 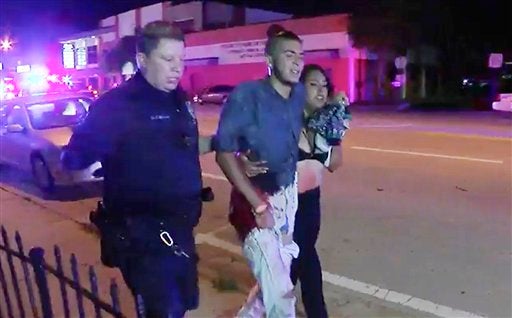 An injured man is escorted out of the Pulse nightclub after a shooting rampage, Sunday morning June 12, 2016, in Orlando, Fla. A gunman wielding an assault-type rifle and a handgun opened fire inside a crowded gay nightclub early Sunday, killing at least 50 people before dying in a gunfight with SWAT officers, police said. It was the deadliest mass shooting in American history. AP Photo

ORLANDO, Florida — Luis Burbano felt his bones shake when the bullets started flying early Sunday morning in the Orlando gay nightclub where a gunman opened fire and killed 49 people while wounding 50 others.

A little more than a day later, Burbano was unable to sleep and was dealing with a crippling guilt about being one of those who lived.

About 2 a.m. Sunday, Burbano heard gunshots. He was in a smaller side room at Pulse, and the gunfire matched the beats coming from the speaker. He and his friend thought it was part of the music they’d been enjoying all night.

“It was bah, bah, bah, bah. But then we all looked around and said it sounded weird,” Burbano said, sitting on his front porch Monday afternoon in the Avalon Park community of Orlando.

“When I heard those bullets being fired, I knew those weren’t small handgun bullets,” he said. The music in the back area of the club called the Adonis room stopped after the shots started, Burbano said. The gunfire sounds started getting closer.

He fell to the floor. He grabbed his best friend and a girl standing next to him and forced them down, too.

READ: Tony Awards 2016 Dedicates the Ceremony to the Victims of the Orlando Shooting

After the initial gunfire burst, he said there was a break of about 10 seconds. He jetted toward an “employees only” side door to get out. Behind that door, about 20 people were stuck in a narrow hallway trying to get out.

“At that point, the gunshots started getting louder and closer as if (the shooter) was getting closer,” Burbano said.

He closed the door and held it for a few seconds to let the people stuck in the hallway clear out.

Burbano made it out a few seconds later, and realized he was covered in blood.

Near him was another man, his arm destroyed by the gunfire.

Burbano made a tourniquet out of his T-shirt and tied it around the man’s dangling arm.

He saw other patrons with bullet wounds fall to the ground in anguish.

Soon the police were telling him to run. He did.

“Until it happens to you one day, you never know how you’re going to react,” he said.

Burbano said he has been unable to sleep since. He can’t do anything but watch the news. He feels guilty for surviving.

Tearing up, Burbano said he doesn’t feel lucky for making it out alive.

“Someone told me I got a second chance at life, and I say ‘Is that what this is?’ I regret it. I regret that second chance,” he said.

Read Next
Drilon: No rancor in giving up seat to Koko
EDITORS' PICK
In Borongan, nuns play hoops (not mahjong)
House energy committee chair Arroyo bats for cheap electricity
A laptop that maximizes your WiFi so you can maximize your productivity
Why Tagle is a leading papal contender
Powered by style, innovation and passion
KWF has no power to ban, censor written works – Lagman
MOST READ
Why Tagle is a leading papal contender
Arjo Atayde reveals proposal to Maine Mendoza was ‘more than a year’ in the making
My neighbor FVR: From soldier to president
Zubiri on SRA mess: Shameful, disgusting
Don't miss out on the latest news and information.