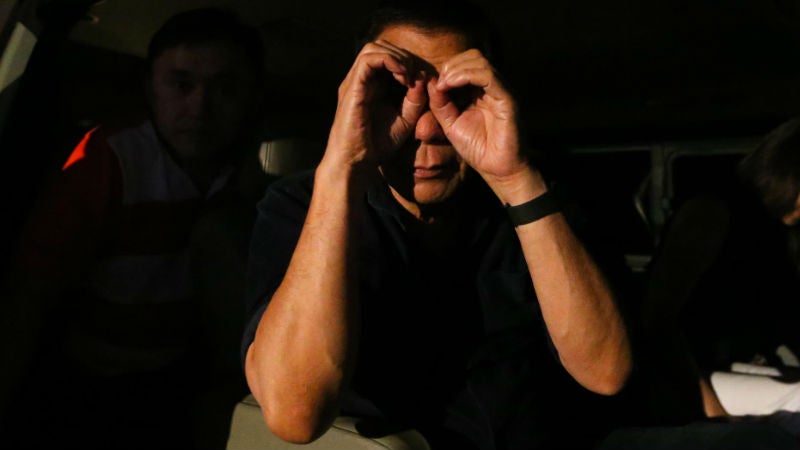 A source told Inquirer.net that about 20 crime bosses, mostly drug lords doing time at the New Bilibid Prison (NBP), would contribute to the kill-Duterte fund.

According to the source, who sought anonymity for obvious reasons, earlier reports of a P50-million bounty on the heads of Duterte and De la Rosa “are not true, but bigger.”

“Not only one person will pay, but people from different organizations,” said the source, who has intimate knowledge of the illegal drug trade.

“There are probably 20,” the source said, of the “main players” who each pledged to toss P50 million into the pot, which would total P1 billion.

De la Rosa earlier said that drug lords in the NBP had offered P10 million each for his and Duterte’s heads. But there were no takers so the bounty was raised to P50 million each.

The bounty from the drug lords came after Duterte offered rewards for every drug lord and pusher killed. The President-elect promised P5 million for every dead drug lord, P3 million for a syndicate member and P50,000 for a small-time pusher.

De la Rosa then issued a warning to criminals: “We will crush you. We will bury you.”

De Lima led the first in a series of raids at the NBP that resulted in the discovery of moneyed inmates, mostly drug lords, living in “suite-like” huts with appliances, hot tubs, gadgets and more.

Following the first raid, 19 high-profile inmates, including the drug lords, were transferred to the National Bureau of Investigation while Building 14, a highly secure facility at the NBP, was constructed.

After construction, the 19 inmates were moved back to the NBP and imprisoned in Building 14, where they are isolated from the other inmates.

Cruz, on the other hand, initiated “Oplan Galugad,” regular raids conducted at the NBP to seize contraband and other prohibited items from the inmates. More than 30 “galugads” have been conducted. He also ordered the dismantling of huts [kubol] that housed high-profile inmates.

Last February, Cruz dismantled a two-story structure occupied by one inmate. It was renovated to house elderly prisoners.

The source said two of the 20 prisoners who pledged to chip in for the P1 billion were among the “Bilibid 19” currently detained at Building 14, while two others were chemists and Filipino prisoners who belonged to the same organization.