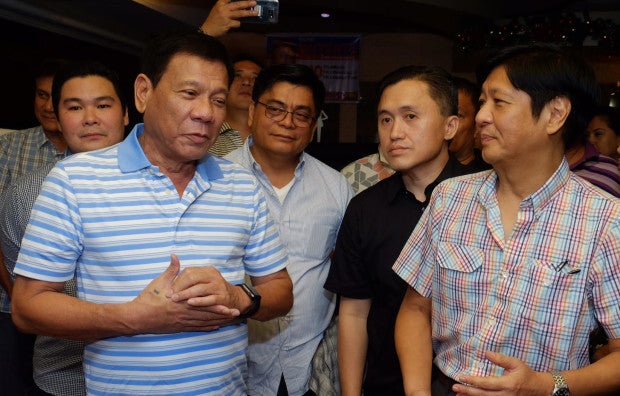 (Updated) Senator Ferdinand “Bongbong” Marcos Jr. confirmed Saturday he met with incoming President Rodrigo Duterte, but said that he has not been offered a Cabinet position yet.

In a press briefing in Quezon City, Marcos told reporters he made a courtesy visit to Duterte on Friday night in Davao City.

Asked about the details of their meeting, Marcos said he thanked the President-elect for his pronouncement of allowing his father to be buried at the Libingan ng mga Bayani.

(I went there because it gave me the opportunity to personally thank him for his statements: first, regarding the burial of my father, second, for his support for me and his friendship.)

He said Duterte discussed with him his plans particularly on busting crimes and illegal drugs in the country.

“Siya ‘yung nagsasalita, ‘yung mga plano niya (He was the one talking, just about his plans). He was explaining again his position, his very strong position against the drug problem in the Philippines na talagang kanyang prayoridad (which is really his priority),” he said.

Asked whether he was offered a Cabinet post, the senator said they did not discuss it. There is a one-year appointment ban for losing candidates.

(We did not talk about it. We only talked about my plan to file an electoral protest, and I assured him that he would not be affected in any way.)

Marcos, an outgoing senator, was referring to the electoral protest he is set to file after losing the vice presidential race in the May 9 elections.

But pressed about his possible role in a Duterte administration, he said he and Duterte only discussed it in a “very general way.”

“Only in a very general way dahil hindi naman y’un ang sadya ko e (because it was not the purpose of my visit),” he said.

Duterte earlier said that he was not inclined to give vice president-elect Leni Robredo a Cabinet post because he did not want to hurt the feelings of Marcos, whom he considered a friend. IDL

READ: No compelling reason for me to give Leni a Cabinet post’ – Rody