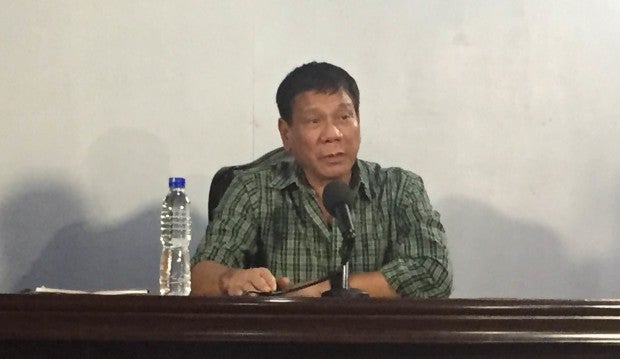 President-elect Rodrigo Duterte on Tuesday said he is “non-committal” about giving a Cabinet post to vice president elect Leni Robredo because he is friends with Sen. Bongbong Marcos. Photo by Marc Jayson Cayabyab

PRESIDENT-ELECT Rodrigo Duterte on Tuesday said he is “non-committal” about including Vice President-elect Leni Robredo in his Cabinet because he and her rival candidate Sen. Bongbong Marcos are friends.

In a press conference at the presidential guest house in Davao City, Duterte said it is the “political reality” that he is friends with Marcos, noting that his father was a Cabinet member of the administration of the late dictator Ferdinand Marcos, Bongbong’s father.

“Non-committal ako diyan kasi kilala ko si Bongbong. I know Bongbong Marcos. I don’t want to hurt him. Leni will understand, she’s from the opposite side,” Duterte said of Robredo, who was proclaimed as Vice-President elect running under the outgoing administration’s Liberal Party.

He noted that he lost heavily in Robredo’s territory in Bicol but he won by a landslide in the “Solid North” Ilocos, the bailiwick of Marcos.

He clarified, however, that political alliances, not his poor votes in Bicol, were the reasons Robredo was not given a Cabinet seat.

“There’s no compelling reason for me to accommodate the Vice President. I’m sorry,” Duterte said.

Robredo, the widow of Interior Secretary Jesse Robredo who died in a plane crash in 2012, defeated  Marcos Jr. in the vice presidential race.