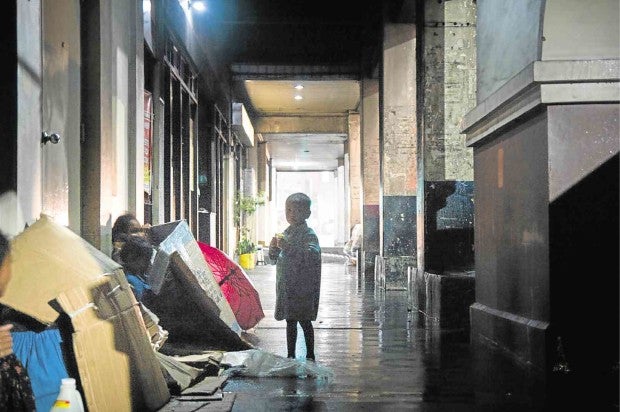 A YOUNG boy takes shelter inside the Baguio public market, along with indigenous peoples who had been begging in Baguio City, during a storm in May 2015. RICHARD BALONGLONG/INQUIRER NORTHERN LUZON

BAGUIO CITY—The National Commission on Indigenous Peoples (NCIP) said it would not stand in the way of efforts to rescue children being used by supposed Badjao families to beg in this city.

Cordilleran social workers, many of them raised in tribal communities, have expressed reservations about taking custody of the children, fearful of violating the Indigenous Peoples Rights Act (Ipra) of 1997.

Government lawyers had cautioned the office of the city social welfare and development office against rounding up the children because of Ipra, said Baguio social welfare officer Betty Fangasan.

The office had taken into custody an indigenous boy, who claimed he was brought here by Badjao families, who were not his relatives, Fangasan said.

“We don’t know if we should treat his case as a child trafficking issue at the moment,” Fangasan said, pending clearer policy guidelines about indigenous peoples becoming beggars.

The NCIP said there was no legal conflict.

“Although Ipra protects Badjaos from discrimination, it does not condone the abuse of children,” said lawyer Roland Calde, NCIP Cordillera director.

Calde said NCIP was proposing a coordinated program involving the Department of Social Welfare and Development (DSWD), the Commission on Human Rights and the city social welfare office to address the proliferation of supposed Badjao families in Baguio.

Social workers had dealt with mendicancy before, particularly cases involving senior citizens, who travel from the provinces to cities like Baguio to beg.

Beggars used to be banned from Baguio during the American colonial period, according to local records.

But social workers were upset about children being used to beg, which is unacceptable to the Cordillera culture, said Janet Armas, DSWD director in the Cordillera.

She said to wean away Badjao families from begging, they could be tagged beneficiaries of a modified conditional cash transfer (CCT) program.

The CCT program, started by the Arroyo administration and continued by President Aquino, requires beneficiary families to send children to school and to undergo health checkups as conditions for receiving cash aid from the government.

Making Badjaos CCT beneficiaries, however, would require building temporary housing for them.

Fangasan said the city government needed to determine whether to treat the presence of IP beggars as a peace and order or a migration issue.

“They are welcome but they must follow our rules,” she said.

She said adults might  be allowed to “go about their business” begging but not with children in tow. Social workers, she said, wanted to keep children, some barely a year old, protected.

On May 28, five adults and nine children were rounded up and sent by social workers to a relocation site in Pampanga province. Three days later, the same adults and children were again seen sleeping on sidewalks here. Vincent Cabreza, Inquirer Northern Luzon