P13 billion worth of illegal drugs seized in 27 months—PNP 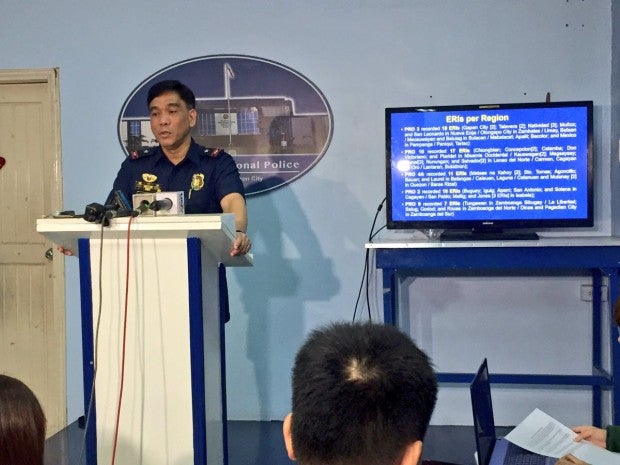 PNP spokesperson Chief Supt. Wilben Mayor says close to 100,000 drug offenders have been put to jail from 2014 up to this year. JULLIANE LOVE DE JESUS/INQUIRER.net

Since 2014, the Philippine National Police (PNP) has rid the country of at least P13 billion worth of illegal drugs.

Data from the PNP’s Directorate for Operations showed that from January 2014 until April this year, the PNP has confiscated billions of pesos worth of illegal drugs after carrying out a total of 54,886 police operations.

In a press briefing on Friday, PNP spokesperson Chief Supt. Wilben Mayor said close to 100,000 drug offenders have been put to jail from 2014 up to this year.

The PNP revealed the data as President-elect Rodrigo Duterte, who has declared war against drugs and criminality, is about to take over the highest post in the land on June 30.

Mayor also discussed bigtime drug operations, including the interdiction operation on a clandestine shabu (methamphetamine hydrochloride) laboratory in Angeles City last March 16. It yielded some P50-million worth of controlled substances used in manufacturing the illegal drug.

In April, the PNP confiscated 99 kilograms of shabu with an estimated street value of P465 million in separate operations in Metro Manila.

During the first quarter of 2016, a total of 228.7 kilograms of shabu worth more than P1 billion were seized from 18 suspects, mostly foreigners of Asian descent, during nine separate drug raids and buy-bust operations.IDL/rga