A Sikh man in India has been hailed as a hero after he set his religious beliefs aside to rescue a dog in danger of drowning.

As seen in a a one-minute-and-eight-second video uploaded on YouTube last week, Sarwan Singh willingly removed his turban in public and used it to save the canine.

Singh, 28,  was driving by an irrigation canal in Punjab, India, when he spotted a group of people pointing near the watercourse, according to a report on UK-based Independent.com.

He stopped his car to check and saw a dog struggling in the water. “I was shocked to see that there was a dog drowning but no one was actually helping,” he was quoted in the report as saying.

Singh admitted that he could not swim well enough to save the dog, so he figured using his turban to reach for it instead.

He quickly unwrapped his headwear, much to the dismay of onlookers who thought he was disrespecting his faith, the report said.

Singh descended down the steep slope at the edge of the canal, while holding on to his turban to keep himself from falling.

He waved another piece of material close to the dog, who tried to grab it, while several bystanders held the other end for him.

With one hand holding himself up, and the other helping the dog to hold on, Singh managed to pull the dog to safety.

“The dog was frightened, so I fed him some biscuits and let him go on his own,” he said.

Meanwhile, the internet commended the Sikh’s brave act through a series of Twitter posts: 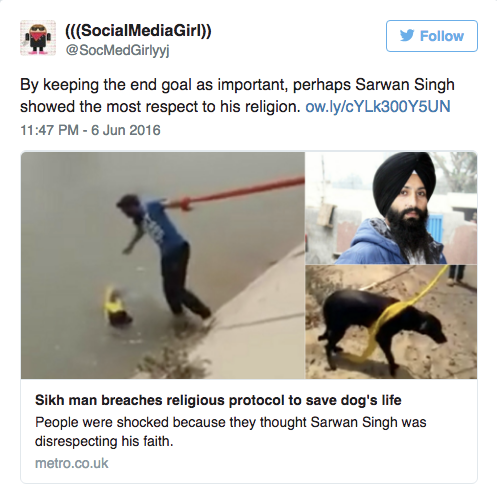 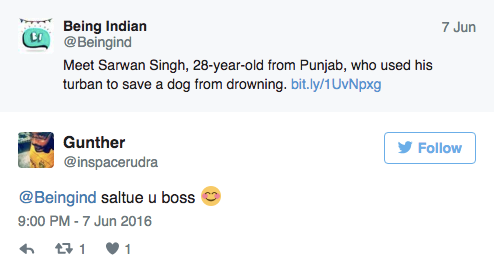 The wearing of turbans among males is one of the pillars of Sikhism, which symbolizes truthful living, equality between all human beings, social justice and worshiping one God.

Sikhs wear their turbans in public at all times. Khristian Ibarrola