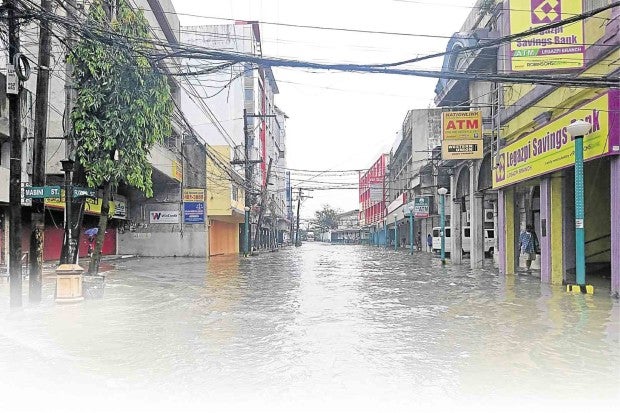 LEGAZPI CITY—Disaster response and local officials in this capital of Albay province are pinning their hope on a recently completed P2.1-billion project to solve the city’s flooding problem.

“Flooding has been a perennial problem of the city since [Legazpi] is [situated] below sea level. But with the availability of high-end technology, we hope this will be solved [soon],” Mayor Noel Rosal said.

Legazpi, particularly its low-lying areas, is often hit by floods. Rosal said floodwaters submerge most parts of the city, often resulting in cancellation of classes.

Legazpi, he said, has been hosting national and international conventions so it is important to develop the city as an all-weather, disaster resilient area.

The city’s latest flood control project, funded by the national government and implemented by the Department of Public Works and Highways (DPWH), was opened by President Aquino on May 5.

Rosal said the multibillion-peso project features floodgates and three pumping stations in strategic locations in the city. River channels in the villages of Tibo, Baybay and Victory were widened to ease the flow of floodwater.

“[With the flooding problem gone], more investors will come in and that would surely boost the city’s economy,” he said.

Rosal said generator sets would keep the flood control system running even during outages caused by storms and flooding.

Sections of Legazpi’s central business district, which include the villages of Cabangan, Orosite and Barangays 13, 14 and 15, are among the worst hit areas.

“[With the project in place,] I’m confident that there will be no more preemptive evacuation of families when floods are expected to hit the city,” Intia said.

Floodwaters took several days to subside when Legazpi was submerged after Typhoon “Reming” hit Albay in 2006. At least 1,500 people were reported dead or missing after the typhoon devastated the city. Michael B. Jaucian, Inquirer Southern Luzon

Read Next
Dagupan gets ambulance boat
EDITORS' PICK
A delightful blessing!
IATF tightens border control, suspends entry of fully vaxxed nationals from ‘green’ countries
Villar Group gears up for AllValue Shopping Party on Dec. 3; around P 1-million promos and discounts up for grabs
Duterte open to making jabs mandatory; Cabinet mulls ‘pressuring’ the unvaccinated
Legarda: Ending Violence Against Women, a cause for all
Metro Manila to remain under COVID Alert Level 2 until December 15
MOST READ
Quiboloy warns of ‘much worse than Omicron virus’ if his ‘persecution’ is not stopped
PH changes mind, stops entry of vaccinated tourists due to Omicron variant
After Duterte: Avoiding China’s ‘pledge trap’
2 Pharmally execs put behind bars
Don't miss out on the latest news and information.