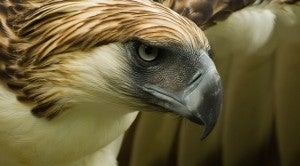 The national bird of the Philippines, the Philippine Eagle or “Haring Ibon.” Photo by Klaus Nigge, courtesy of Haribon Foundation

CITY OF SAN FERNANDO— A Philippine eagle (Pithecophaga jefferyi) rescued by a farmer in a forest in Aurora’s San Luis town last week was placed under the custody of the Department of Environment and Natural Resources’ Biodiversity Management Bureau (BMB) in Quezon City, an official said on Thursday (June 9).

Milla said the raptor had to be turned over last June 2 to the BMB for rehabilitation.  It will stay at the BMB until it is healthy to be returned to the forests, according to Milla.

“[The BMB] has the facilities required to care for the eagle properly,” he said.

In April, the National Bureau of Investigation seized seven Palawan pangolins and cobras from a Chinese woman transporting the wildlife via the Clark Freeport north of this Pampanga capital.

These and the Aurora eagle brought to 58 the animals and birds rescued and confiscated by the DENR in Central Luzon since 2011.  SFM/rga