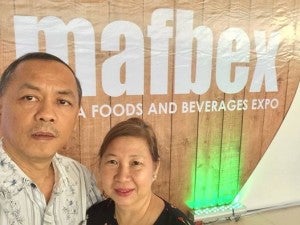 Peter Laviña, spokesman of President-elect Rodrigo Duterte’s transition team, announces in his Facebook post, that his wife, Evelyn Laviña (right), has been tapped by Duterte to become an undersecretary at the Department of Agriculture. (Photo from the Facebook page of Peter Laviña)

DAVAO CITY – The wife of Peter Laviña, spokesperson of President-elect Rodrigo Duterte’s transition team, will be appointed undersecretary at the Department of Agriculture.

Laviña, in a Facebook post, has announced that his wife Evelyn will be taken in by incoming Agriculture Secretary Emmanuel Piñol to focus on high value crops.

“Evelyn studied pharmacy and the medicinal values of plants. Little wonder she was drawn more to plants rather than marketing drugs. Eldest among eight Gonzales (from Balanga, Bataan) siblings, she grew up helping manage their family-owned rice farm and fishponds in Davao del Norte, raising bangus and tiger prawns. She was also one of the pioneers in catfish production in Davao City,” Laviña said.

Laviña said his wife was being appointed not because of his involvement in the campaign but because of her experience and qualifications.

“Through business partnership, she got involved in orchids and ornamental plants. She served as president of the Floriculture Industry of Davao Inc. (FIDI), and later went into the landscaping business. She was active in many flower organizations at the local and national levels, including the Philippine Orchid Society,” Laviña said.

He added that when Evelyn’s family sold their 30-hectare fishpond, they started investing on a mango plantation in Davao del Sur, intercropping cacao and coffee.

“”She was the founding treasurer of the Cacao Industry Development Association of Mindanao Inc. (CIDAMI),” Laviña said.

“She served as vice president for agribusiness of the Davao City Chamber of Commerce & Industry Inc. (DCCCII) where she developed an extensive network among those involved in high value crops like banana, pineapple, mango, vegetables, livestock, poultry, coconut, oil palm, aquaculture, herbal plants, organic farming, hydroponics, among others,” he added.

Evelyn is also part of the Davao Food Processors Association and has been involved in different agribusiness programs of the government, according to Laviña.

“Evelyn is also active in the Philippine-Australia Human Resource and Organizational Development Program and serves in the Board of Trustees of the Philippine Women’s College of Davao (PWC). She just ended her two-year term as president of the Soroptimist International Davao promoting the interests of women and girls and was active in campaigns against cancer and human trafficking, the promotion of livelihood for women and conservation of the environment,” Laviña said.  SFM/rga