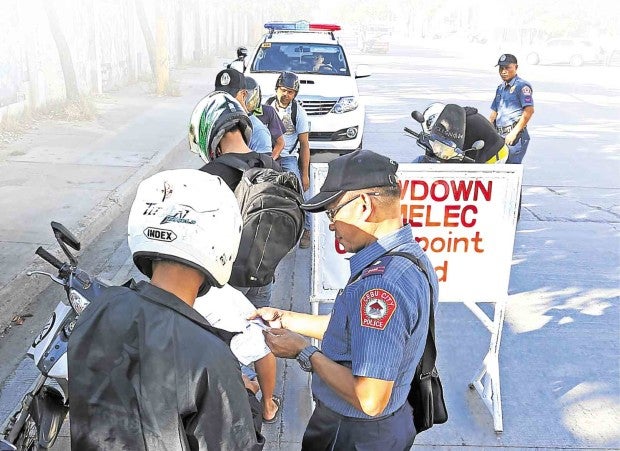 POLICE checkpoints, like this one in the village of Mabolo, Cebu City, are becoming more visible following a pronouncement made by President-elect Rodrigo Duterte that he would end, or sharply reduce, criminality in six months even if it meant killing criminals on the spot. LITO TECSON/CEBU DAILY NEWS

Communities in many parts of the country are stepping on the accelerator in their race to win battles in the war on crime through local law enforcement campaigns that officials said were inspired by the promise of President-elect Rodrigo Duterte to launch brutal operations to drastically reduce, if not stamp out, criminality in the first six months of his term.

In Cebu City, a police officer said she foresees a trend of fugitives surrendering to police as a result of fear among crime suspects of ending up dead when the incoming Duterte administration makes good its promise to wage a war on crime that would take no prisoners.

In the province of Quezon, police noted an increase in participation by residents in a village-based campaign to fight crimes.

Supt. Aileen Recla, head of the Cebu City police’s investigation and detective management branch, said she believed fugitives feared Duterte’s pronouncements on crimes that they started to yield to authorities.

Recla made the statement after one of the city’s most wanted men, suspected car thief John Glenn Arao-arao, surrendered to her on Friday.

On Wednesday, Raymart “Macmac” Conahap, who is wanted for a murder case in Cebu City, also surrendered to Supt. Michael Bastes, head of the city police’s intelligence branch.

Conahap, from the village of Carreta in Cebu, admitted that he killed a man, who had been bullying his neighbors, in 2015.

Conahap said he surrendered because he wanted to change his life.

“Now, two fugitives surrendered. I think that would be the trend now,” said Recla.

She said she also believed that a reward system offered by Mayor-elect Tomas Osmeña is also having an impact on crime suspects. Osmeña has offered a P50,000 bounty per dead criminal and P10,000 for each wounded suspect.

A resident of Mambaling village in Cebu, Arao-arao said he was convinced to surrender by his brother and a member of the Barangay Intelligence Network, a community group that keeps watch on crime suspects.

“I was scared because Duterte won the presidency,” he said in an interview at the office of Recla.

“I got scared because his propaganda was to clean the country of lawless elements,” he said.

He said people were initially hesitant to support the program, which was launched in January.

“They don’t want to get involved lest they become victims,” Paguirigan said.

The change in attitude was visible after Duterte was elected, he said.

So far, Paguirigan said at least 600 drug suspects have been arrested in Quezon.

At least five suspected drug traffickers were killed by policemen, he said.

Paguirigan said Quezon policemen have been “inspired and motivated” by Duterte’s assurance of support for the war on crime.

Men in neighborhoods, he said, have started to volunteer as village watchmen.

A former overseas worker in Quezon, who asked not to be named in this report, said he would heed Duterte’s call to fight criminals.

“I have my own gun to use, if necessary, as long as police will allow me to use it,” he said. He admitted, though, that his .45 cal. pistol is unlicensed.

Duterte had called on citizens to arrest drug traffickers and shoot them if they resisted arrest.

He also offered a P5-million reward to anyone who kills a drug lord.

“We want to prevent the spread of vigilante attitude among our people,” he said.