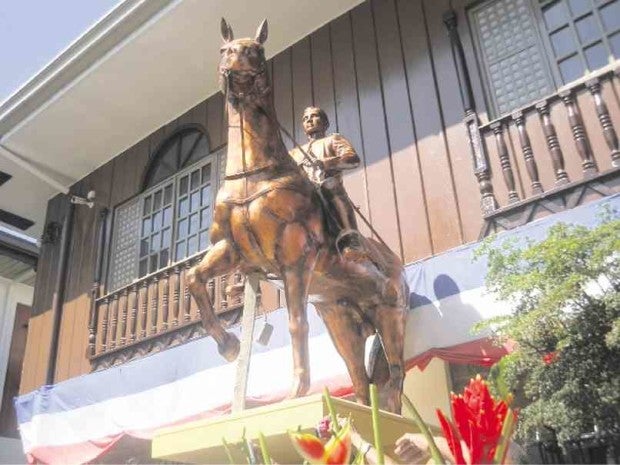 CABANATUAN CITY—They were Nueva Ecija’s elitistas, or people who were wealthy, educated in top schools, and held high government positions, but for love of country, they opted to be leaders of the 1896 revolution against Spain in the province.

Some of them were killed in action or were executed. Others continued leading the fight in the Filipino-American war in 1898.

Their deeds are worth emphasizing especially in these times when sacrifices of leaders are needed for the common good.

Eight of them became generals, one a commander of the revolutionary army, another a “Tagalog boy-general of the Ilocanos,” and another returned to his post in the colonial government and was executed with his officials.

Generals Mariano Llanera and Pantaleon Valmonte led the siege of San Isidro, then the seat of the Spanish provincial government in Nueva Ecija.

They led a cloak-and-dagger stance as they were capitan municipales of the towns of Cabiao and Gapan, respectively. They pretended to be friendly with Spanish authorities while they were secret members of the Katipunan.

Valmonte, a son of the first gobernadorcillo of Gapan, was a classmate and friend of national hero Dr. Jose Rizal at Ateneo de Manila.

He allowed his house to be used for the recruitment of members of the Katipunan in Gapan. He also entertained there the Spanish provincial governor and the commander of the guardia civil.

When the list of the Katipunan members fell into the hands of the Spanish authorities, as a friend to the governor, Valmonte was advised to be “very careful” as his name was on it.

His impending arrest goaded him to meet Llanera in Cabiao and helped, together with revolutionary leaders Alipio Tecson, Mamerto Natividad, Manuel Tinio and Llanera’s son, Eduardo, in planning the attack on the government center in San Isidro.

While 3,000 revolutionists volunteered to join the siege, Llanera selected only 500 as they had limited guns. Valmonte, on the other hand, led another column in Gapan for the assault.

Llanera’s attack was described as “having carried out in a flamboyant manner.”

“The revolutionaries, wearing red ribbons, marched to the music of the Cabiao Musikong Bumbong band from the village of Pulo, 5 kilometers from the town proper, to the principal streets (of San Isidro). Their leader (Llanera) cut a dashing figure on horseback. They bandied about that they would serenade the governor for the release of the jailed revolutionaries. Then, the revolutionary soldiers staged the attack,” said one account.

The commander of the guardia civil was killed, forcing his soldiers to retreat. The revolutionists then freed the incarcerated Katipuneros and emptied the government’s coffer. After three days, more Spanish troops were deployed that made the revolutionists to flee.

After four months, Llanera reemerged and joined the forces of Gen. Emilio Aguinaldo. He was promoted to lieutenant general and was appointed vice commander of the revolutionary army.

Valmonte did not hide; he opted to be with other Gapan officials. He, his vice mayor, councilors, municipal judge, secretary and other officials were arrested and executed.

Mamerto Jr. and his brothers, Benito and Jose Salvador, became generals, while his three other siblings became junior officers.

Mamerto Jr. became chief commanding general of the revolutionary army in Central Luzon. He was killed by a sniper in the offensive, which he launched with Gen. Pio del Pilar and his two brothers in Cabiao.

The other Novo Ecijano generals were Alipio Tecson, Urbano Lacuna and Manuel Tinio. They were from wealthy families.

Tinio, a son of a landowner in Nueva Ecija, was promoted by Aguinaldo to brigadier general at age 20, becoming the youngest general ever. He was appointed commander of operations and was later sent by Aguinaldo to the North for the liberation of the Ilocos provinces.

With his Tinio Brigade, composed mostly of Novo Ecijano revolutionists, he was named military governor of the Ilocos provinces and became commanding general of the Filipino forces in Northern Luzon.

He continued his exploits in the Ilocos region during the Filipino-American war. The famous Texas Rangers were sent to stop him but failed.

Tinio, along with Gen. Benito Natividad, 36 senior and junior officers and 350 riflemen, was forced to surrender on orders of Aguinaldo, who had been captured by the Americans.

In his surrender, “he handed his revolver, but the American general handed it back to him—a token of respect to the then 23-year-old general.”

Of Tinio’s exploits in the North, Gen. Arthur MacArthur, then military governor, said: “The little war in the Ilocos was the most troublesome and perplexing military problem in all Luzon.”

In a monument to Llanera in Cabiao, the names of 461 peasants and others with various callings who died in battle were listed in the “Tablet of Heroes.”

All of them are honored on Nueva Ecija Day every Sept. 2. In the nation’s flag, the province is represented as one of the rays of the sun’s design.