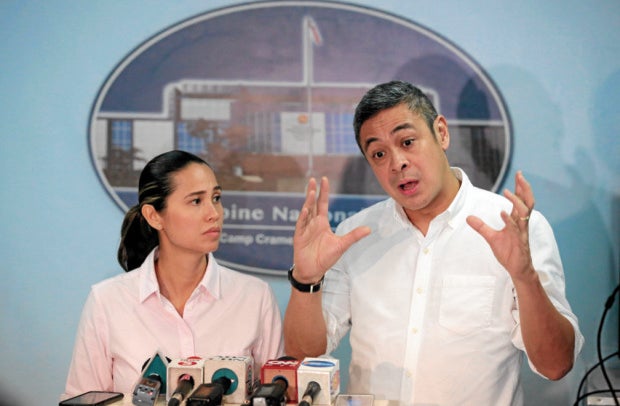 Anthony Pangilinan and wife Maricel Laxa-Pangilinan speak in a press briefing at Camp Crame, Quezon City on Wednesday, June 8, 2016. The couple recount what transpired during an entrapment operation wherein suspect Myca Acobo Aranda was arrested as she posed as Maricel or her children to extort money from friends and supporters of the Pangilinan family. GRIG C. MONTEGRANDE

A female college student was arrested by members of the Philippine National Police (PNP) Anti-Cybercrime Group (ACG) after alternately posing as celebrity Maricel Laxa-Pangilinan and her children to extort money from the celebrity’s friends and relatives.

In a press conference on Wednesday, PNP ACG Director PSSupt Guillermo Lorenzo Eleazar said that the suspect, identified as Myca Acobo Aranda, was arrested on Tuesday after she withdrew the P5,000 sent by Laxa-Pangilinan’s friend.

Anthony Pangilinan, Maricel’s husband, said that Aranda was able to convince a Facebook user named Suzette to send P5,000 to her using a fake account.

Aranda reportedly told Suzette that the money will be used for the outreach program of her “daughters” in the Cordilleras. The money was sent through LBC.

Eleazar said that Aranda also solicited money from the friends and relatives of the celebrity couple.

The arrest was made with the cooperation of the victims, Smart Padala agents and other police units.

The PNP ACG director said that Aranda, an Information Technology student at the King’s College of the Philippines, was able to hide digital evidence on her gadgets and her identity.

The college student will be charged for violation of section 4b3 (Identity Theft) of Republic Act 10175 (Cybercrime Prevention Act of 2012), Section 4a (Child Abuse) of Republic Act 7610 and Article 315 (Swinding/Estafa) of the Revised Penal Code in relation to section 6 of RA 10175. AJH/RAM