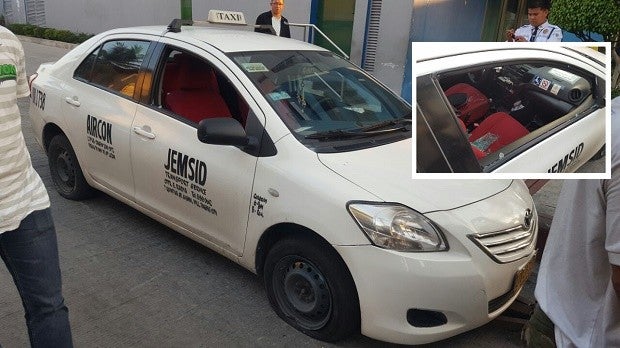 Police prepare to tow a stolen Jemsid taxi, with license plate UVJ 738, which was allegedly used in the robbery-molestation of a female call center agent in Makati City on April 29, 2016. The cab was abandoned at the corner of Mascardo street and China Roces avenue Sunday morning. Inset shows shattered glass on the front seat of the cab, whose driver reportedly engaged lawmen in a gunbattle before fleeing. CENON B. BIBE JR. / INQUIRER.NET

A quick-thinking female call center agent escaped a robber-rapist who posed as a taxi driver in Makati City, police told the Inquirer.

Chief Insp. Ferdie Satorre, chief of the intelligence section of the Makati police, narrated the plight of the call center agent after his men engaged the suspect in a gunbattle and a car chase before dawn on Sunday, May 1, 2016.

According to Satorre, the 26-year-old call center agent took a Jemsid cab (UVJ 738) along Ayala Avenue at about 3 a.m. on Friday after ending her shift.

The woman asked the cabbie to drive her to Taguig City before taking note of the taxi’s name and plate number, which she then texted to her boyfriend, Satorre said, citing the victim’s statement to the police.

After moving into the highway, however, the driver pulled out a gun and declared a holdup.

Stopping on the side of an isolated stretch of road, he ordered the victim at gunpoint to transfer to the front passenger seat.

Instead of letting her go after the robbery, however, the gunman drove the victim to the Guadalupe area of Makati where he parked the cab in a dark inner street in Barangay East Rembo.

The gunman ordered the woman to pull her pants down and began molesting her.

He was reportedly preparing to move the woman to the back seat when a light outside one of the houses nearby suddenly went on and spooked the driver, who then sped away.

Police said the gunman was apparently bent on raping the woman because he had again parked along a dark inner street before telling the woman to quickly transfer to the back seat.

Wearing only a blouse

By then, the woman was  only wearing a blouse, police said.

Seeing an opportunity, the victim ran away screaming for help.

Some residents reportedly went out of their houses to check the commotion, which prompted the gunman to quickly drive off.

Residents helped the victim, who then reported to the police, who sent out an alert for the suspect and his cab.

On Saturday morning, intelligence operatives under Satorre spotted the Jemsid cab parked in an alley along Montojo Street, near the corner of Chino Roces Avenue, in Barangay Tejeros.

Satorre said a background check showed that the Jemsid cab was stolen in Quezon City last week before it was used for the robbery-molestation on the call center agent.

Believing that the robber-molester would go back for the vehicle, Satorre ordered a round-the-clock stakeout on the taxi.

At about 3 a.m. on Sunday, someone came back for the cab.

Intelligence operatives said they first saw a man on a motorcycle circle the area once before driving away. The man was apparently checking if the coast was clear, police said.

Minutes later, the man came back on foot and entered the cab, prompting the police to accost him.

When the lawmen identified themselves, the man pulled out a gun and reportedly opened fire, prompting police to fire back, sparking a brief gunbattle.

Amid the exchange of gunfire, the suspect sped off toward Pasong Tirad street. Policemen drove after the gunman, who managed to lose the lawmen in the maze of streets.

Police later found the taxi parked at the corner of Mascardo street and Chino Roces avenue, some 300 meters from where the car chase started. Its right passenger window was shattered and its right front tire was flat.

But the gunman was nowhere in sight.

Satorre said police were following up leads about the suspect’s identity and whereabouts.

The robbery and molestation incident followed a series of similar incidents where some victims were raped inside stolen taxis.

On April 12, 2016, Makati police arrested Nitro Ison, also known as Ricky Ramos, whom a victim later identified as one of at least two suspects who allegedly robbed and raped her.