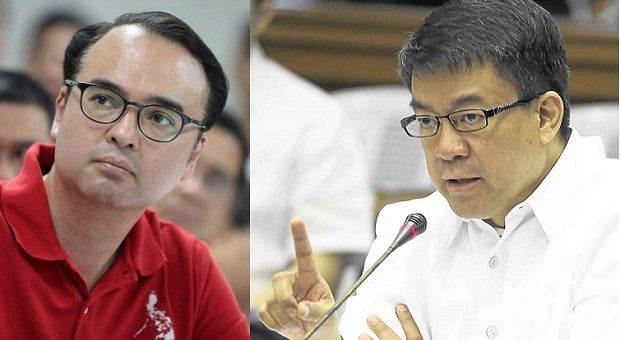 After being chosen by the majority of his colleagues to be the next Senate president, Senator Aquilino “Koko” Pimentel III said he would extend his hand of “friendship and cooperation” to Senator Alan Peter Cayetano and invite him to join the chamber’s new majority bloc.

“(I) will extend my hand of friendship and cooperation to Alan and invite him and his group to join the majority,” Pimentel said in a text message to reporters on Wednesday.

Cayetano belongs to the Nacionalista Party (NP) which will have three members in the Senate in the 17th Congress: himself, Senator Cynthia Villar and Senator Antonio Trillanes IV. Senator Ferdinand “Bongbong” Marcos Jr. is a Nacionalista but his term will be ending on June 30.

Cayetano, who has expressed his desire to run for Senate president, earlier claimed to have the support of about 15 senators.

Among those who have openly expressed their support or inclination to support Cayetano were Villar and Senators-elect Manny Pacquiao and Juan Miguel Zubiri.

But incumbent Senate President Franklin Drilon announced at a forum this Wednesday morning that Pimentel’s bid for the highest post in the chamber has already received the backing of around 16 to 17 senators, including him.

“Last night, we met and had that agreement. The president of the incoming Senate will be Koko Pimentel III. I will be the Senate President Pro Tempore and (Senator Vicente) Tito Sotto will be the Majority Leader,” Drilon said.

Read Next
Venezuelans pick through trash for food to eat or sell
EDITORS' PICK
CPA Australia and their designation: Advance your career
Four ‘Gubat sa Ciudad’ guests test positive for COVID-19
Marian Rivera partners with JC to boost public health awareness
Finance for all: GCash helps trike drivers and vendors cope with the pandemic
Pagasa: Metro Manila heat index may reach 39 to 41 degrees Celsius
Rabiya Mateo ends her Miss Universe journey in Top 21
MOST READ
Most of PH would still have hot weather, but ITCZ to affect Mindanao
Duterte downplays PH’s arbitral win vs China again, branding it as ‘meaningless’
1Sambayan in talks with 2 to 3 more possible candidates for 2022 polls
PH Red Cross to offer Moderna’s COVID-19 jab for P3,500 per 2 doses – chairman
Don't miss out on the latest news and information.