17 senators back Koko for Senate presidency

WITH the Liberal Party (LP) and the Nationalist People’s Coalition (NPC) joining the emergent Partido Demokratiko Pilipino-Lakas ng Bayan (PDP-Laban), a “supermajority” has emerged in the Senate, giving President-elect Rodrigo Duterte control of Congress and assuring support for his legislative agenda that includes a shift toward federalism and the return of the death penalty.

Sen. Aquilino “Koko” Pimentel III, president of the PDP-Laban that fielded Duterte as its standard-bearer in the May 9 elections, is likely to be voted Senate President in the 17th Congress.

Pimentel, Senate President Franklin Drilon of the LP and Sen. Vicente Sotto III of the NPC have decided to join forces to form the supermajority of 18 senators, Sotto told the Inquirer on Tuesday, two months before the new Congress convenes on July 25.

Only 13 members are required to form the majority in the 24-member Senate.

“We are elevating the coalition arrived at the House of Representatives to the Senate,” Sotto said, referring to the alliance of political parties forged in the lower chamber under incoming House Speaker Pantaleon Alvarez of PDP-Laban.

On Tuesday, an LP delegation  led by Speaker Feliciano Belmonte Jr., flew to Davao City, seat of the government in waiting, to discuss a deal with Duterte and Alvarez to bring President Aquino’s disintegrating Daang Matuwid coalition into the PDP-Laban fold, which had only three representatives elected last month.

Duterte, whose campaign promise was “radical change,” snubbed a joint session of Congress last week that convened as the national board of canvassers to proclaim him winner of the May 9 balloting to become the 16th President of the Republic, as lawmakers began leapfrogging to abandon the ruling coalition and join the new regime in the season of turncoatism.

Under the deal outlined by Sotto to the Inquirer, Drilon will be the Senate President Pro Tempore, while Sotto will be the majority leader.

Sotto and Drilon, along with Pimentel, had earlier served notice they wanted to be the Senate President in the 17th Congress.

The rest of the senators are either from the United Nationalist Alliance, Laban ng Demokratikong Pilipino and independents.

In a Twitter message, Lacson put the number of the supermajority at 20.

He told the Inquirer everyone was welcome to the group. “We want to experience a Senate minority of none, for a change,” Lacson said.

“We are looking at a working and cooperative relationship with the incoming President without sacrificing the independence of the Senate,” Sotto said.

Duterte has vowed tough measures against criminality, including the return of the death penalty, as the centerpiece of a program to spur economic growth.

He has also announced he wanted to amend the Constitution and adopt the federal system of government.

Cayetano is also contesting the Senate leadership. He earlier said he had the support of 15 senators.

Villar has openly declared support for Cayetano’s bid. While Pacquiao had signed a resolution supporting Cayetano, he ended up in the supermajority. 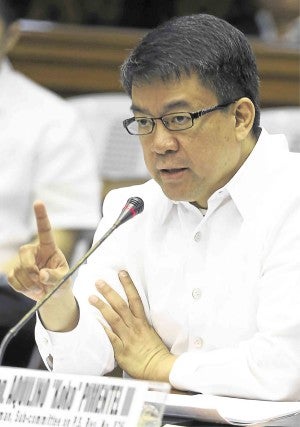 IN HIS FATHER’S FOOTSTEPS Sen. Koko Pimentel looks a cinch for the Senate presidency, a position once held by his father. NIÑO JESUS ORBETA

Sotto last week said he was in talks with 18 senators on building a new majority in the incoming Senate and this included Pimentel.

Pimentel had earlier said the Senate presidency could not be formed without talking to the groups of Sotto and Drilon.

Sotto had said he had nine senators who were solid for him while Drilon said he had seven senators supporting his own bid.

Villar said it was too early to predict the outcome of the race for the Senate presidency. She said she remained committed to Cayetano’s bid for the post.

“That’s the commitment. It would not be good if you would always change your commitment,” she told reporters on Tuesday.

Both Villar and Cayetano belong to the Nacionalista Party, which had forged an alliance with PDP-Laban.

Villar’s son, Rep. Mark Villar, has been drafted by Duterte to be secretary of the Department of Public Works and Highways, an appointment that has been roundly criticized on grounds of conflict of interest. The Villar family is one of the country’s largest real estate developers.

Asked if she would be ready to be a member of the Senate minority, Villar said that would be OK with her. But she said she wanted to keep her chairmanship of the agriculture committee, as she believed she could do a lot to improve agriculture in the country.

“That’s my wish and I don’t think I will lose it. Even if you’re a member of the minority, you’re entitled to your previous committee if you had not left it,” she said.

This is a Senate “tradition,” she said. She also noted that there would be a lot of committee chairmanships to be vacated by the lawmakers leaving the legislature, which the Senate newcomers could get. With a report from Leila B. Salaverria