DAVAO CITY, Philippines—Just follow your heart, your people and remember your mother.

A known supporter of President-elect Rodrigo Duterte had that advice to the tough-talking mayor amid heavy criticisms hurled against him due to his recent statements and actions.

Duterte drew flak from local and international media groups for saying that corrupt journalists were legitimate targets of assassination. The 71-year-old executive also received criticisms for wolf-whistling at a television reporter during a press briefing.

“I think, everybody’s gonna tell Mr. Duterte how to be presidential, and my advice to him would be, just follow your heart and follow your people and remember your mother, that’s all,” Ateneo de Davao University President Fr. Joel S. Tabora S.J. said in an exclusive interview with INQUIRER.net last Sunday.

Tabora, a prominent member of the clergy and highly regarded academic, recalled how the late President Corazon “Cory” Aquino was also told “to be presidential” when she assumed office after a People Power Revolution toppled the Marcos dictatorship.

“When she got into Malacanang, every Tom, Dick and Harry started telling her how to be presidential, you know, so Cory Aquino became presidential and I think she was taken away from the masses,” Tabora said.

“She became presidential, I mean, people began to understand she’s really, you know, fitting into Malacañang. But I think it hurt her,” he added.

Tabora recalled a “very moving scene” of Duterte when he wept at his parents’ tomb, asking for guidance a day after the elections.

“His mother does play a big part in his life. His highest ideals, I think, came from his mother,” Tabora said. 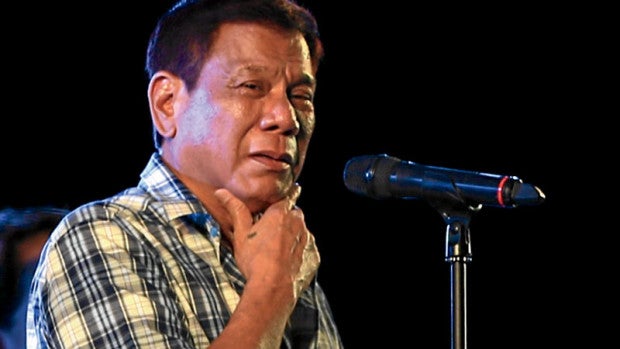 A women’s rights advocate, who is well-known to Duterte, offered her piece of unsolicited advice, saying Duterte  should just be himself.

“This is going to sound really funny but just be yourself,” Irene Santiago, lead convenor of the global peace initiative Women Seriously and a member of a group of women previously nominated for the Nobel Peace Prize, told INQUIRER.net on Monday.

Santiago said Duterte has a lot of sterling qualities that this country needs.

READ: Feminist on Duterte: I can work with that

“His forthrightness, his boldness, his committment to the poor, and to those who do not have the law on their side, so he has a lot, and his fearlessness, that kind of—I am not afraid and that confidence that I can lose everything. I did not covet this office,” she said.

She said Duterte should just be himself amid the barrage of criticisms he has been receiving.

“Just be yourself. We can work on your mouth,” she said.

“Your heart is—we have waited for that kind of heart for a long time. So just be yourself,” she added.

Santiago said Duterte, who got more than 16 million votes in the May 9 national elections, got an overwhelming lead because the people believed he would support them.

“We are all here to help you and I think that’s why people have supported him because they know that they can support such a man and that man will support them,” she said.

During the campaign, Duterte said he’d rather lose in the elections than lose his identity. RAM/rga